Finally I’m here! Finally. I’m in that one place that was on the top of my wish list for so long.
After fighting headwinds for two days like crazy, I made only 35km today to get to the only place with wifi along this highway. I thought I’d had my share of strong winds on Iceland. According to the locals it’s kind of unusual for this place too. It better be..

Let’s go a little back in time, to the flight. Two weeks ago I got on an airplane at Keflavik airport, Iceland. You don’t just do that, it turns out. First I was thoroughly interviewed at the check-in desk about my plans and where I’d spend my first night, next I had to open my bikebox so it could be searched and finally I went through American customs for the first time, still in Iceland.
The flight was breathtakingly beautiful. Departure 17:10, arrival 16:10 same day. We flew with clear blue sky above Greenland and over the islands north of Canada, nothing but mountains, glaciers and ice.

When we ‘entered’ Alaska from the north I had to blink a few times to actually believe what I saw. Nothing but endless forests, rivers and mountains. No road, no houses, no sign of human interference. A first I found it beautiful, but as it lasted and lasted I got a little nervous. ‘What am I doing here? Am I really gonna bike here? This is too big for me. I’m not supposed to be there.’ Feeling a little troubled I got off the plane, happy to see some familiar sights; people, bags, police, structure.
After explaining my imaginary route and from which countries there might be dirt in the profile of my tires, they let me enter the country.
‘Welcome to Alaska’.

The first days, in Anchorage, I was a guest with Stan and Sally. A 50+ and 60+ couple that live on the edge of the city and mainly spend their time going on adventures. When I left them they were just getting ready for a several day trip to catch the fish for the coming year.
Stan prepared me for a possible confrontation with a bear (brown bear: role up and protect neck, black bear: fight back), but mostly to prevent a confrontation (don’t startle them, store food far away from the tent). In the left chalkbag on my handlebar I now carry ‘bearspray’ and on my right frontpannier there’s a bell. ‘GO AWAY BEARS. HERE I COME!’

Since I was in the ‘capitol’, I decided to stay there for the ‘4th of july’. The day that America celebrates their independence (starting in 1776). I expected a big party in town with lots of music, beer and a parade.. Well, there was a parade, with some old cars, the fire department, a band and a bit of army. Besides that, there were games for the kids, a lot of greasy food and some music on a small stage. All in all a friendly family festival.

I accepted the ride out of Anchorage I was offered to avoid a busy and narrow part of the Glenn highway and got dropped off at a WarmShowers host, Dan. I knew he was the director of a ‘camp’. This turned out to be ‘Victory Bible Camp’! A 500 acre camp with a ranch, canoes and a gymnasium. The kids stay in beautiful huts under guidance of teenagers and do fun activities during the day. Next to the games they also do Bible study, pray and talk about their faith. There’re also cabins that are rented out to adults. They participate in the maintenance of the camp and do activities.

WHAT an experience! I got my own cabin and ate in the big dining hall with the other campers. I got lucky that there was also a group from Pennsylvania visiting that week; Mennonites. A religious group that, like the Amish, comes from the tradition of the Anabaptism and I got to talk to a 22-year-old guy who, because he started driving (a car), had to ‘leave the church’. Good thing is that his parents didn’t kick him out (that happens a lot). I tried to have a conversation with him about his plans and dreams and about how different our lives are, that turned out not to be so easy. I could ask him anything I wanted to know, but his replies weren’t always an answer to my question. He told me that he, as the youngest of nine kids, had the right to inhered the familyfarm. A chicken farm, since it had become hard to make money running a dairy farm. He couldn’t tell me about much else then the farm, the repair of a stable and the ‘catching of chicken’. That’s his future, that’s his ‘dream’. And that was also what he answered to my question if he wasn’t curious or longing to do something different, like; study, move to the city or travel. You go to school till you turn 15 and from then on you work, that’s it. Also my question about what he thought about the licentious lives of his peers he couldn’t really answer.

The campdirectors wife, Kimberly, listened to our conversation and afterwards told me that it was very likely that he hadn’t been asked this questions ever before. During the next meal I saw him watch me from his table. I’d love to know if he has thought about our conversation eversince. Maybe it’s in vain, but somehow I hoped I awoke something inside him.

The camp is near the Matanuska glacier. Together with Kimberly I went there and we walked on and explored the glacier. That evening she invited me to stay for another day to fly over the glacier and its surroundings in a 4 person plane the next evening (also here, it stays light in the night).
How great it is to have the time and freedom to just say ‘Yes please! I’ll stay another day for that.’ As a bonus we saw two black bears from the plane on the mountain. 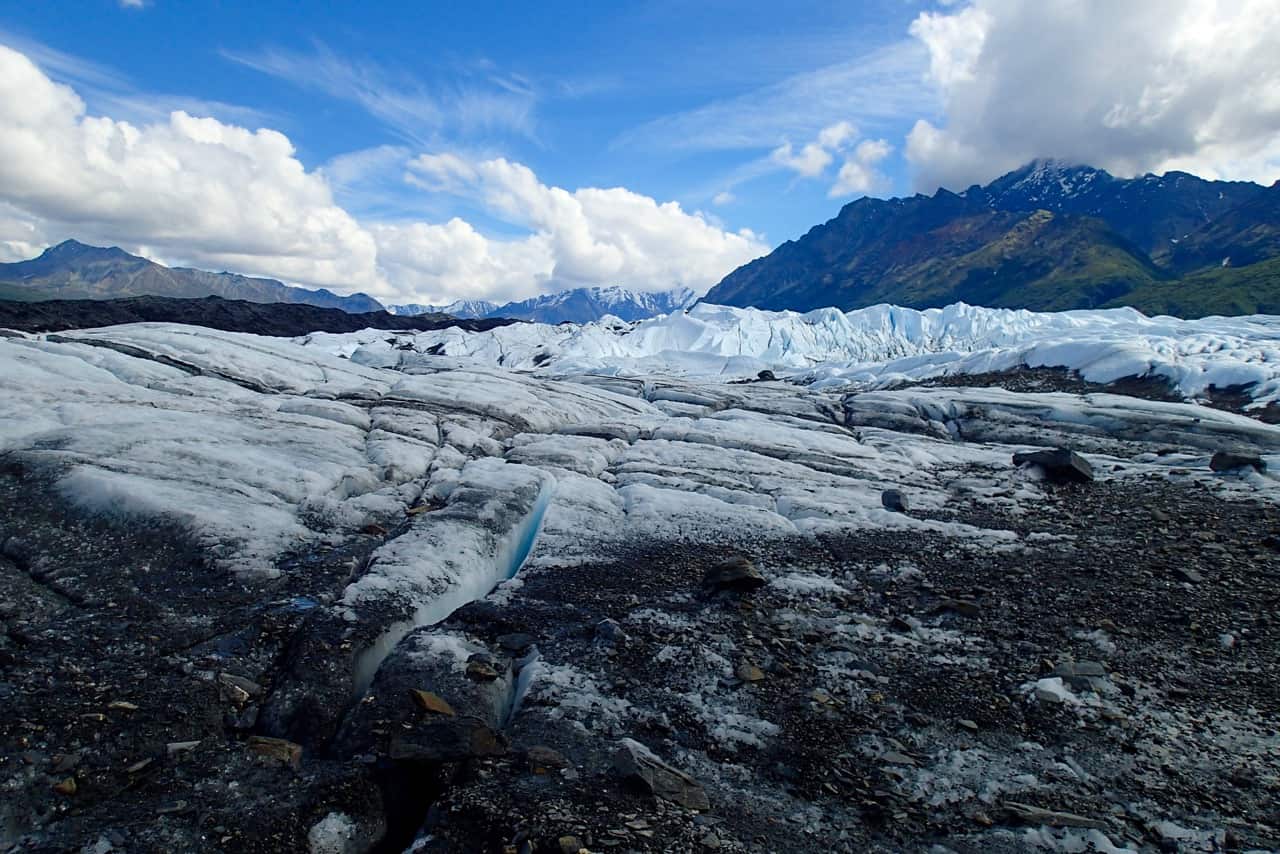 After my stay in Anchorage and the two days at the camp I felt it was time to get on my bicycle and explore Alaska on my own. Even hiking on a glacier and flying above it in a tiny plane cannot compare to the feeling that I have when I’m riding.

The next day I intensely enjoyed to be back on the bike. I camped together with a couple travelling with a Airstreamer at a beautiful quiet spot at a river.

The next day I was in the middle of a race, the ‘Fireweed 400’, with 400, 200, 100 and 50 mile races. They all started in little groups so they would pass me one by one. Nice to have some company on the road. I snacked with them at their foodstops and was welcomed with enthusiasm by the volunteers who supported the race.
That day I heard so many good stories about the Denali highway that I decided to change my plan for the next 2 weeks and not go straight to Fairbanks but to head back west on the Denali highway. This highway is a touristic route, not very practical, and is, different than the other highways, unpaved and only open between May and October.

And here I am. Yesterday a moose crossed the road, less than 30 meters away from me. I just crossed the second highest pass of Alaska, the MacLaren summit at 4048 feet (about 1255 meters). I know, that might not be as high as you’d expected in Alaska. After a gorgeous downhill (I can already see tomorrows climb) I now sit outside my tent with a view on a glacier.

Alaska is exactly what I expected and hoped it would be!
Wide, rugged, grim nature, people trying to find their place in between all that (instead of trying to find a place to plant a tree or grow some grass in between buildings). The Alaskans vary from ‘very much to themselves’ and even surly to very friendly. They’ll help you out when you ask for something but they’re often not overly talkative.
The ‘roadhouses’ I love! They’re like cafés/restaurants where you can get a big mug of watery coffee, burgers and homemade pie.
And always (well, I’ve been to three) there’ll be a guy there with a wild beard and a baseball cap, his pickup truck outside, who looks like he walked straight from the ‘Into the Wild’ movie set.

Tonight I eat at the MacLaren Lodge (also a kind of roadhouse) on the other side of the bridge, so I can use their wifi and upload this blogpost. For the next 2,5 to 3 days I’ll be riding the Denali highway. Whenever I’m on a bad gravelroad, I want to leave it, but back on the pavement with all the other traffic, I long back to the quiet gravelroads. I might just as well enjoy it while I’m here!

Alaska, the last frontier. But for me, the start of an awesome journey.

5 thoughts on “The Last Frontier”