Seated in a comfortable lawn chair, I catch the last yellow rays of sunlight at the end of a hot day.
It’s been 35 celsius today, no wonder sweat dripped down my body as I was racing around town this afternoon delivering meds.

My broken sacrum has fully healed and I can ride, run, ramble and roll again!

Since I’ve made a big recovery in all fields, it’s time to look ahead now at how I want to spend the next few seasons.

The desire to be ‘home’ more regularly is a feeling that’s kinda new to me.

The arrival of two great loves into my live, my wonderful nephew and my Knight in shining lycra, have awoken a desire to be ‘home’ more regularly. A feeling that’s kinda new to me.

I considered going on shorter trips on my touring bike, closer to home. But the idea didn’t get me very excited. To me there’s quite a difference between ‘life on the bicycle’ and ‘a bike holiday’, a big part of that is the challenge; the unknown, the full focus and the duration.
I want to live fully, not be on holidays. 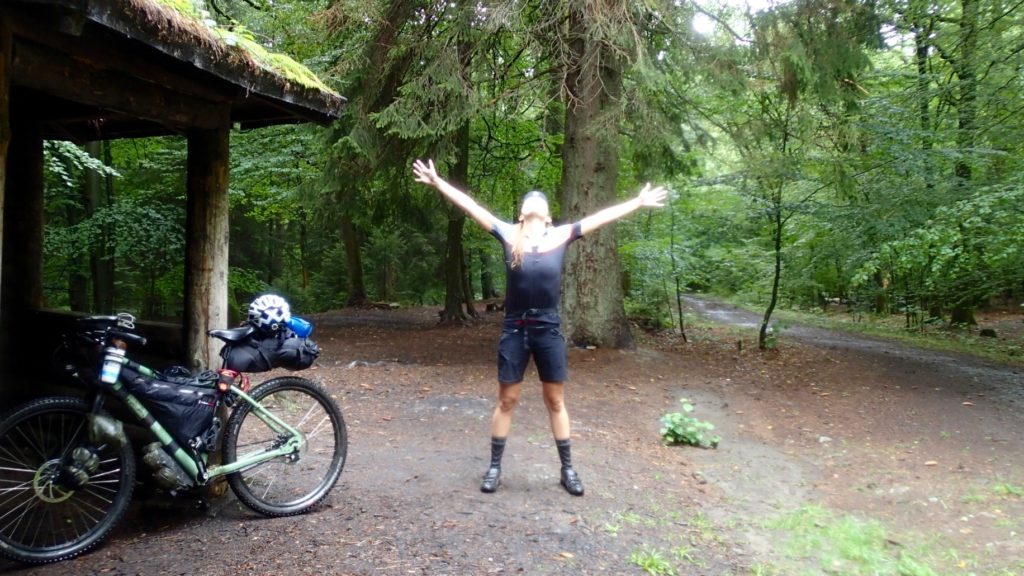 It touched my desire to be away from civilisation. Away from commerce, modern society, concrete and plastic.

When I opened a bikepacking website, looking for a trail to ride with my knight, the pictures, stories and lines on the map captivated me.
It touched my desire to be away from civilisation. Away from commerce, modern society, concrete and plastic.
Could this be a good alternative for biketouring? It might at least be worth a try.

With bikepacking you deviate from the tarmac and head for the gravel, dirtroads, trails and tracks.

I’d have to lose about 20 kilos though… of bagage, I mean.
I always chose to travel with quite a large tent, plenty of clothes, diaries, a laptop and more ‘luxuries’.
The comforts to me weight more than the extra kilos.
Also I used to travel through various seasons and climates in one trip, which requires different types of gear.

With bikepacking I’ll make shorter trips with a (even more) minimalistic kit.
I’ll have to in order to keep the bike light and manageable so I can ride all kinds of trails.

After discussing it with the director of Santos, my knight and a experienced bikepacker, I decided which changes I wanted made to my bicycle.
The bike is a Santos Travelmaster 3+.
Here’s some before and after photos. 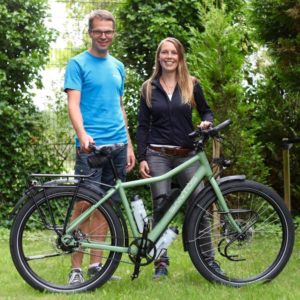 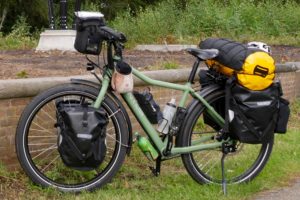 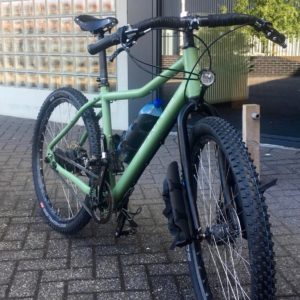 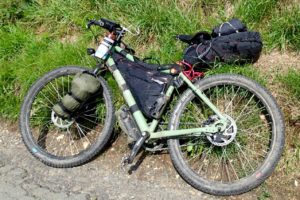 The FORUMSLADER (lader=charger) is a kind of powerbank that is build into the stem. It’s connected to the front dynamo hub (SON) and that way charges when I cycle. There’s a usb outlet on the stem where I can connect my phone or GPS device to so it gets charged during riding or afterwards.

Thanks to all those changes Falcor (that my bike’s name) lost about 5 kilos in one afternoon.
Now he weights just over 15 kilos.

As for baggage, I’d done the math.
The bags on my touring bike offered me about 106 liters of packing space.
For the short trip I was planning on as a starter I’d only have 30 liters to fill; the saddlebag and framebag that I borrowed and the three big bottle cages.

This isn’t the final setup for sure. As different trips require different setups and also I’ll have to learn through trial and error what works and what doesn’t.

But, with the setup as described I took off on the 365km ‘Ardennes Arbalète’ route with its 5890 altimeters. 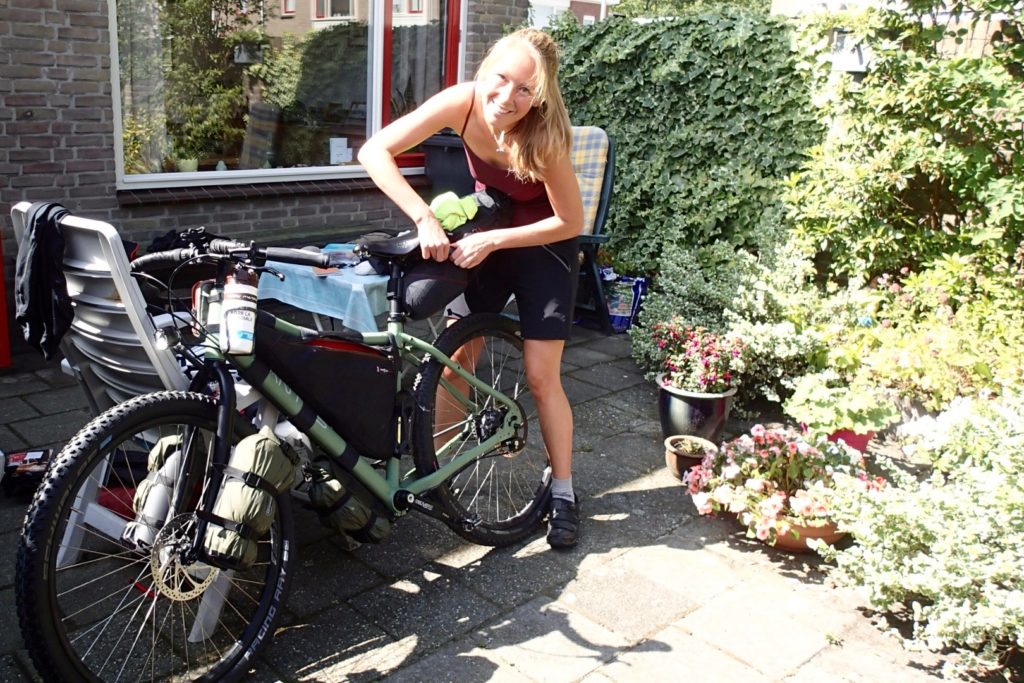 I took a train from my town to the last station before the Belgian border.
To get on the route I followed the GR5 for the first 15 km, a walking route.
Several gates and steep climbs offered some challenges. 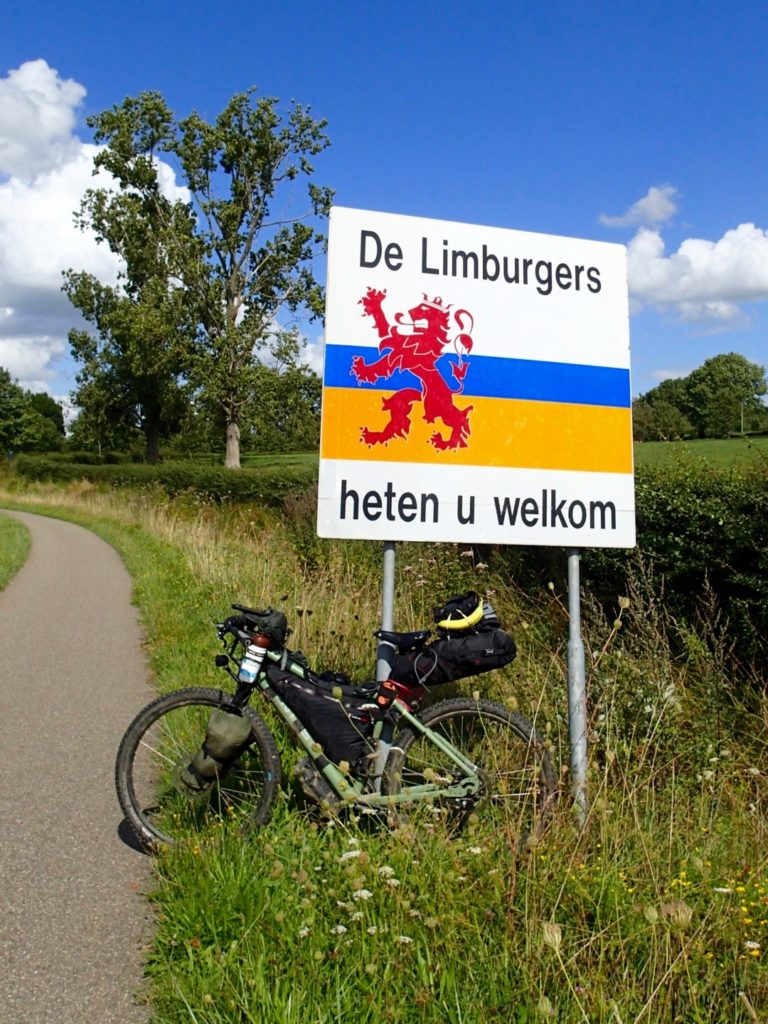 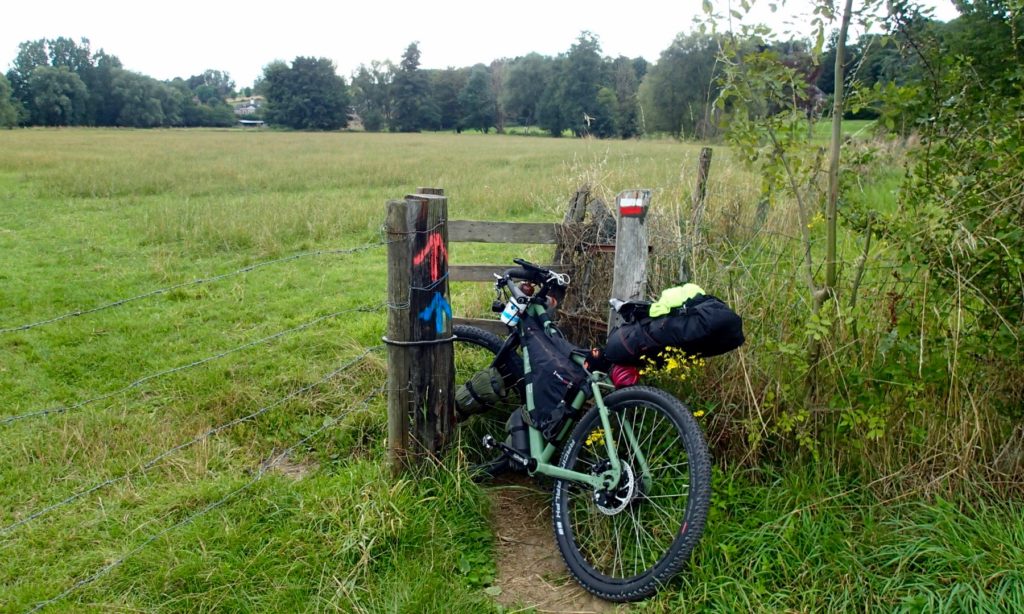 Once on the route I pitched my tent behind a tiny chapel from where I could see the city of Luik as its lights lit up while the sun was setting. 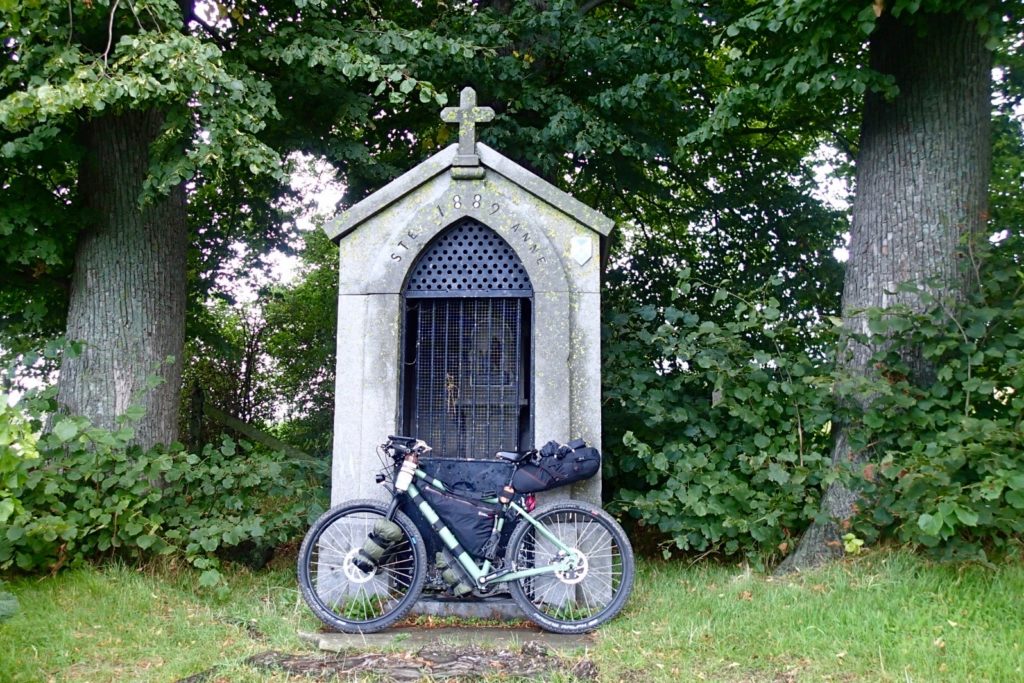 Officially it’s not allowed to wildcamp in Belgium, but there were plenty of spots to do so along the trail. The follwing two nights I pitched my tent at ‘aires de bivouac’.
These are designated areas for free camping and are often equipped with a shelter and fireplace.
Also in summer you’ll often meet other hikers or cyclists there. 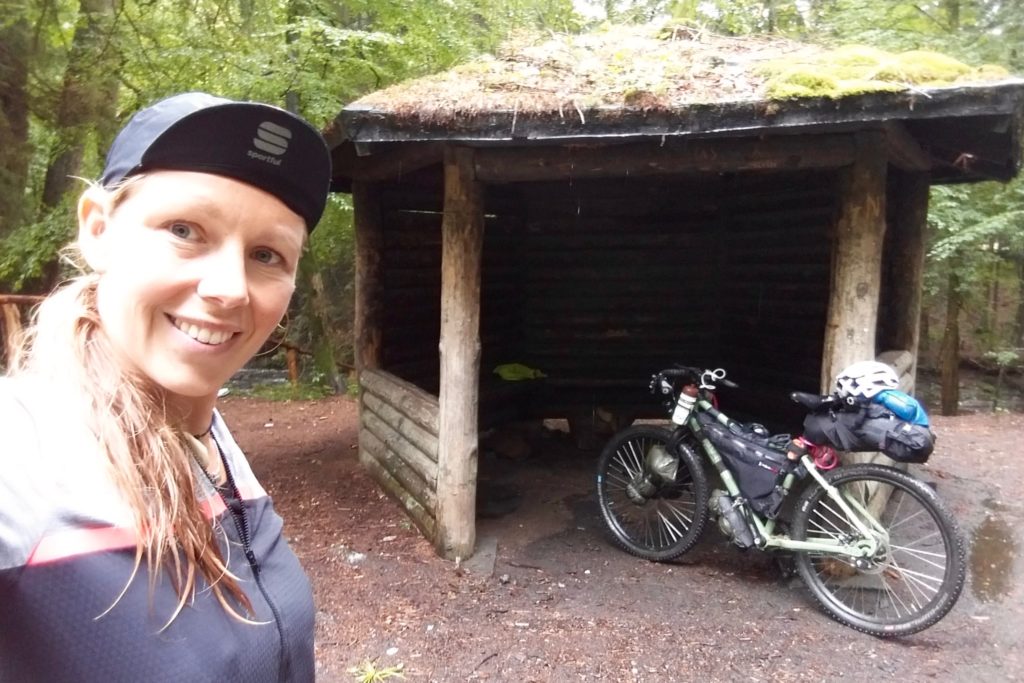 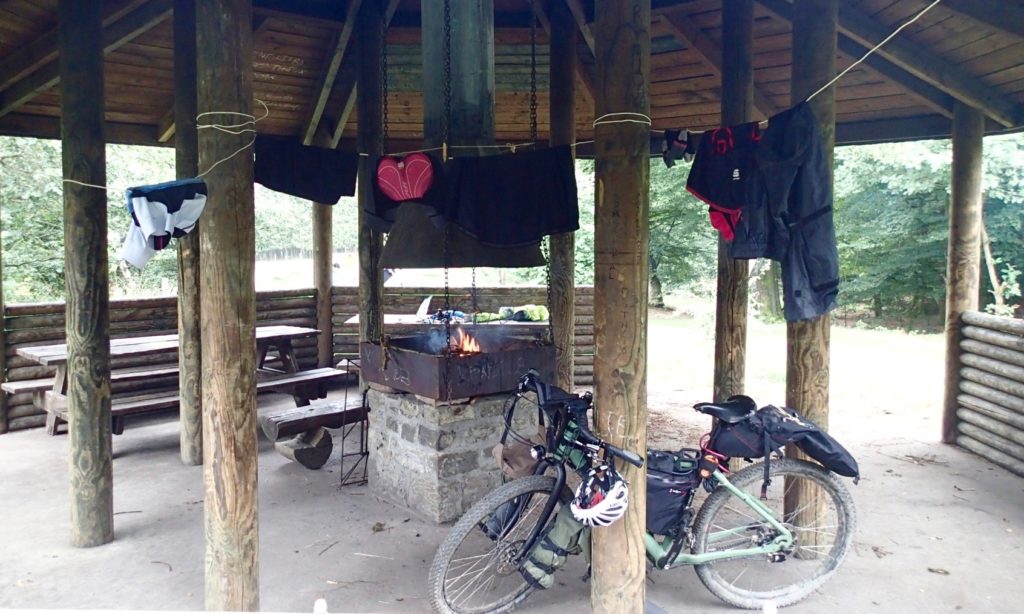 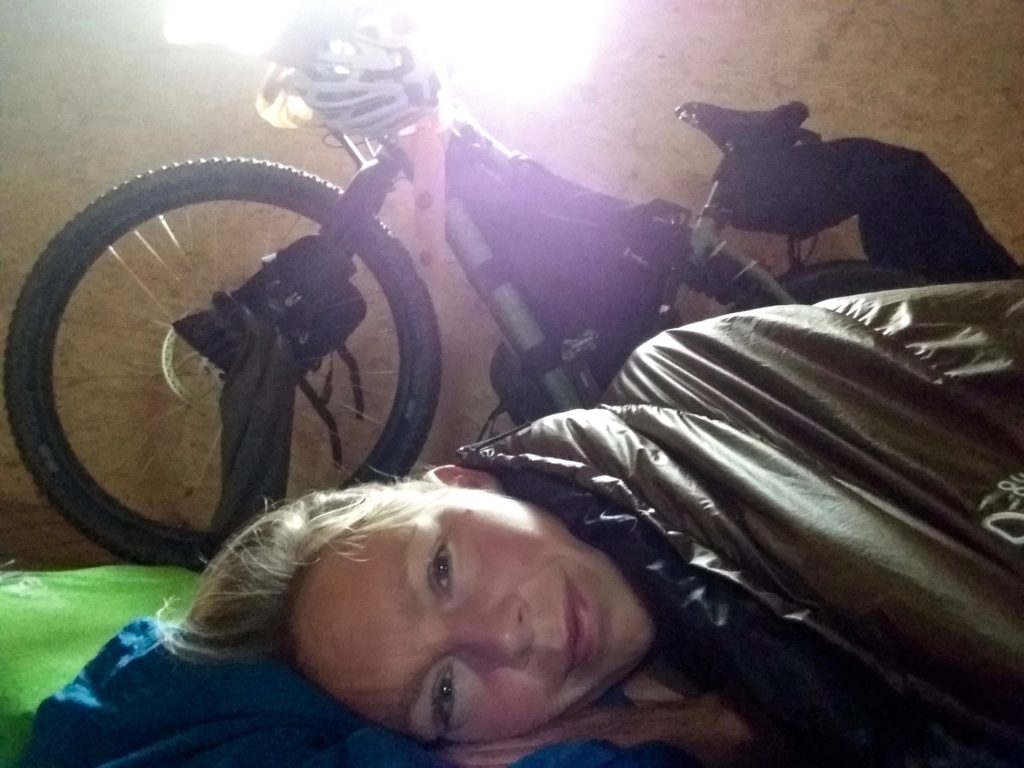 A big part of the trip I followed the gps-route, navigating with my phone; singletrack, gravel, rocks and mud.
Pushing my bike up steep slopes and braking my hands off descending at footpace. 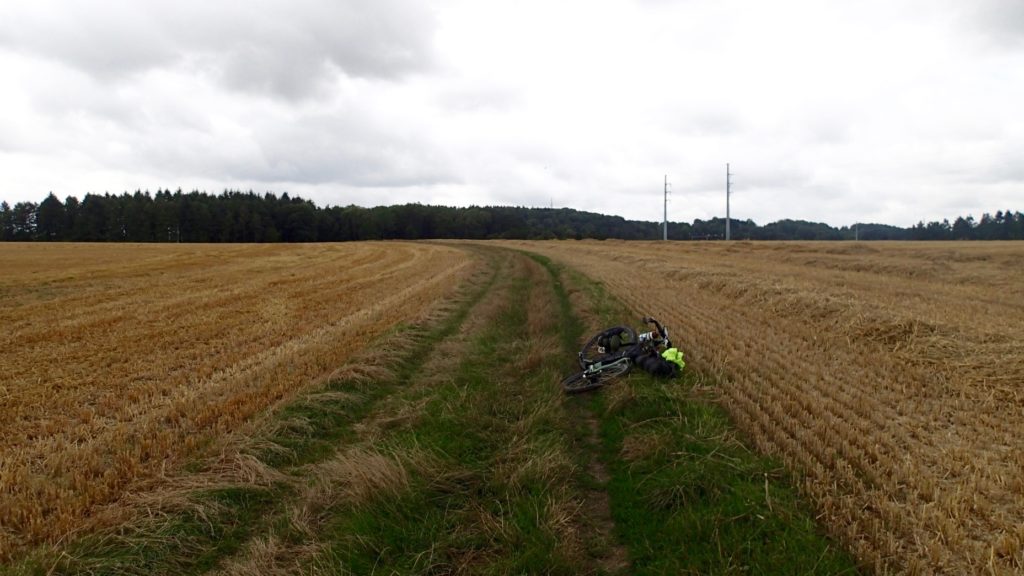 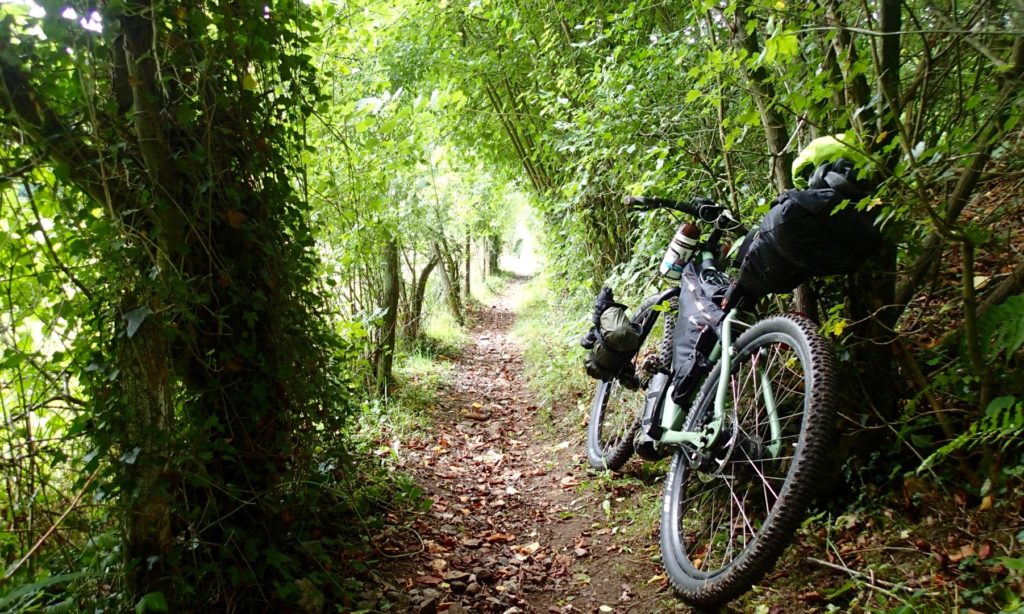 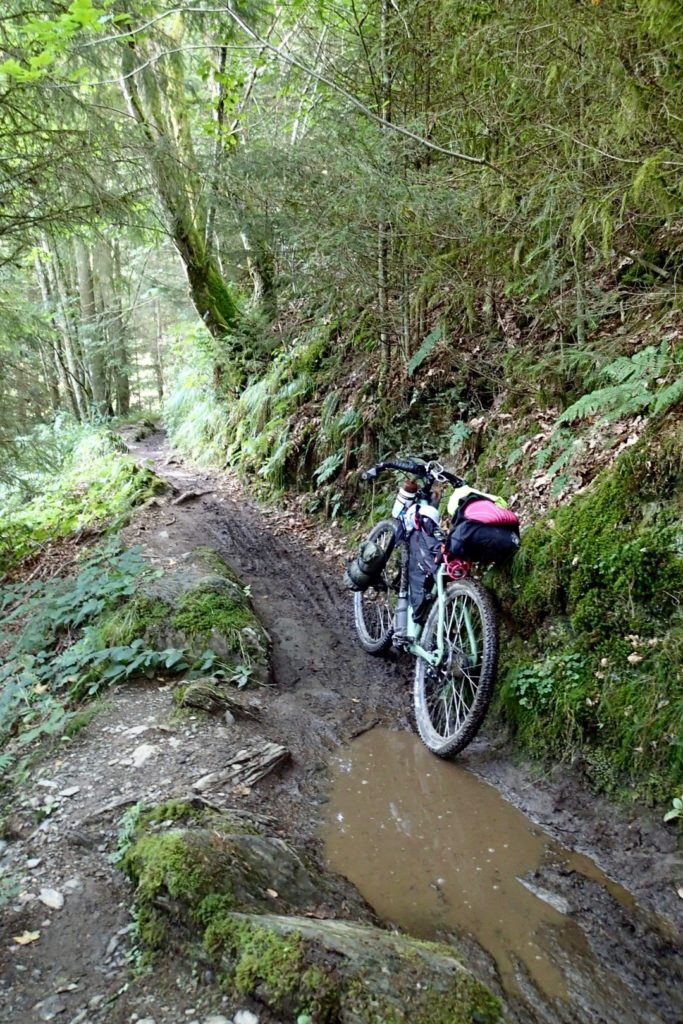 One moment I would cycle easy forest roads, the next minute bramble and nettles were scratching and stinging my legs riding overgrown singletrack.
A few times I took a shortcut over paved roads but soon enough I’d long back to the pristine trails. 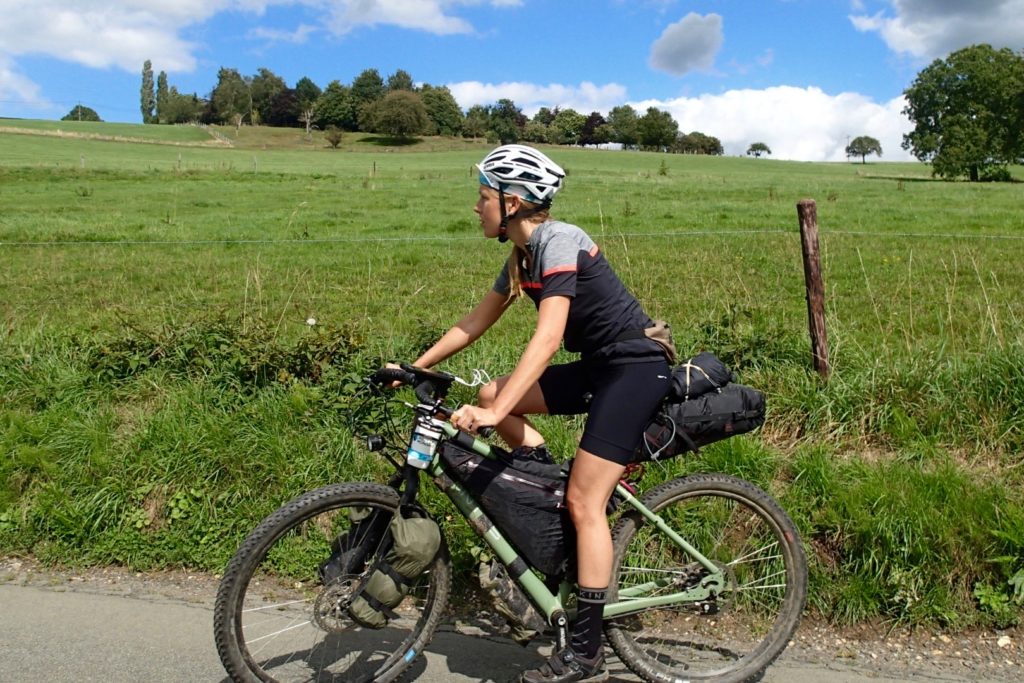 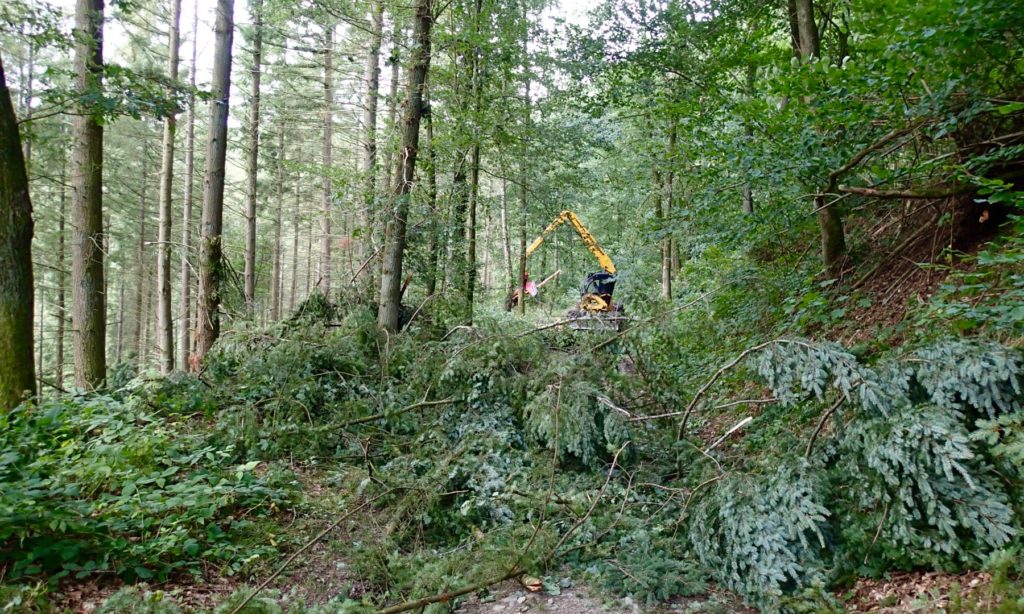 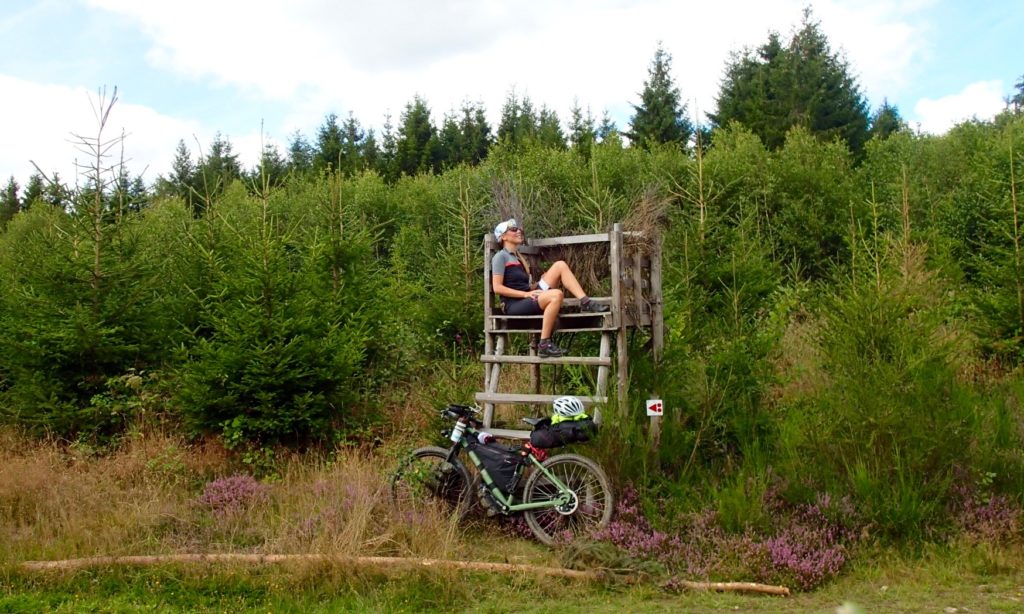 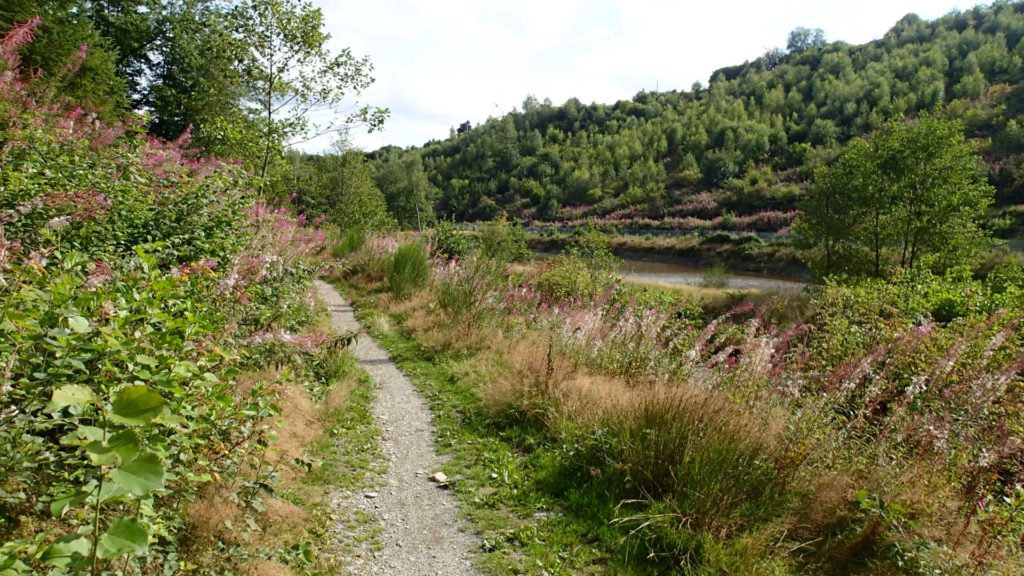 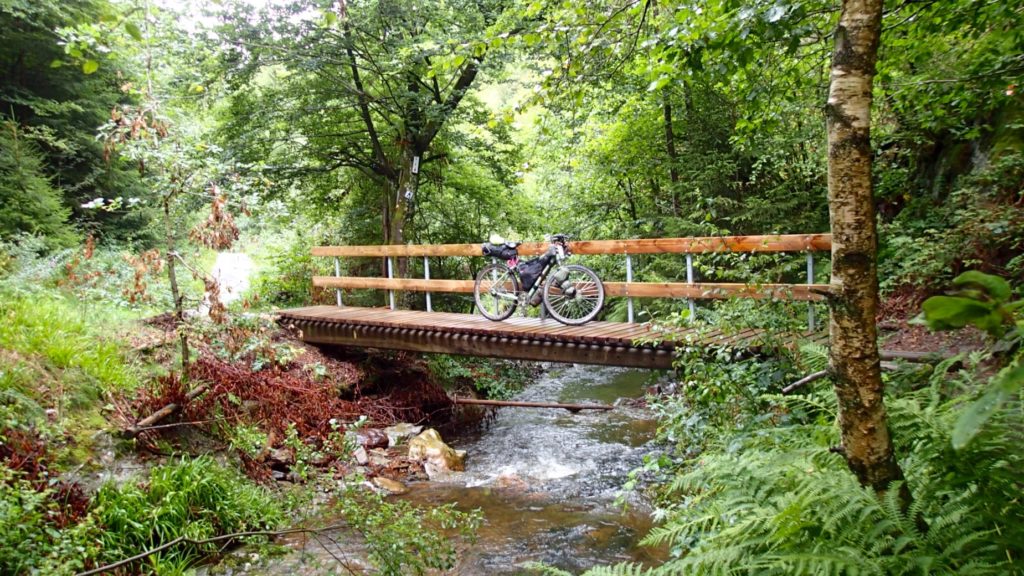 There wasn’t much space for water in my setup.
I’d fill my 4 liter water bag in the last village before I’d camp and cycle the last kilometers with that bag over my shoulder, not ideal.
After a rainy night I discovered that the frame and saddle bags weren’t really waterproof; I could wring out my ‘clean’ bike clothes.
I certainly came across a few things to change or improve before the next trip. 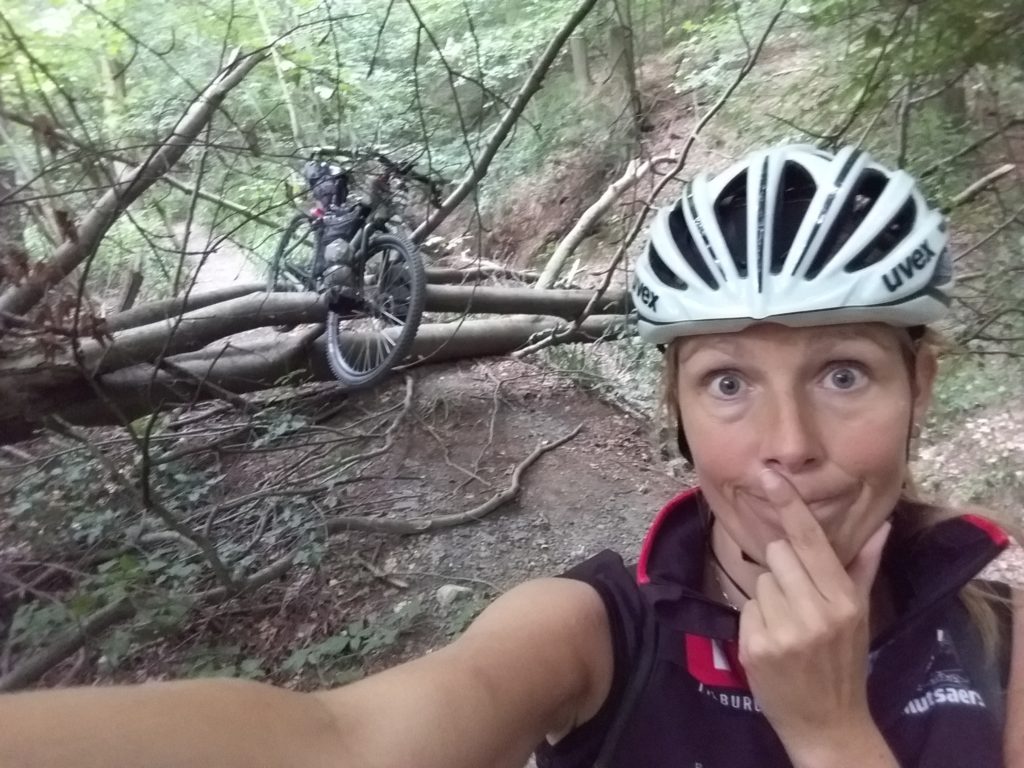 Bikepacking is as old as the bicycle itself.

The classic biketouring setup has proved itself over many years.
Two bags at the front, two on the rear, a roll on top and a handlebar bag.
Bikepacking has just been coming up over the past five years, while at the same time it’s as old as the bicycle itself.

People have always been looking for ways to strap their baggage to their bikes.
It’s just given a new name lately and some brands have designed very useful and pretty bags for it.
But where and how you strap the bags best mainly depends on the weight, size, your personal preference and of course the geometry of the bike.

Being inventive and creative with this is something I really enjoy.

My next ride will be at the end of September in the Jura (France) with my Knight.
After that I’ll fly to Spain at the end of October for 1,5 to 2 months of discovering the trails and tracks in the south.
And after that? Well, I have some thoughts about that too, but I keep those to myself for now.

First things first; my first ride together with my boyfriend and after that my first longer bikepacking trip.

You can expect accounts on both of them of course.

Enjoy the last weeks of summer and every kilometer you ride! 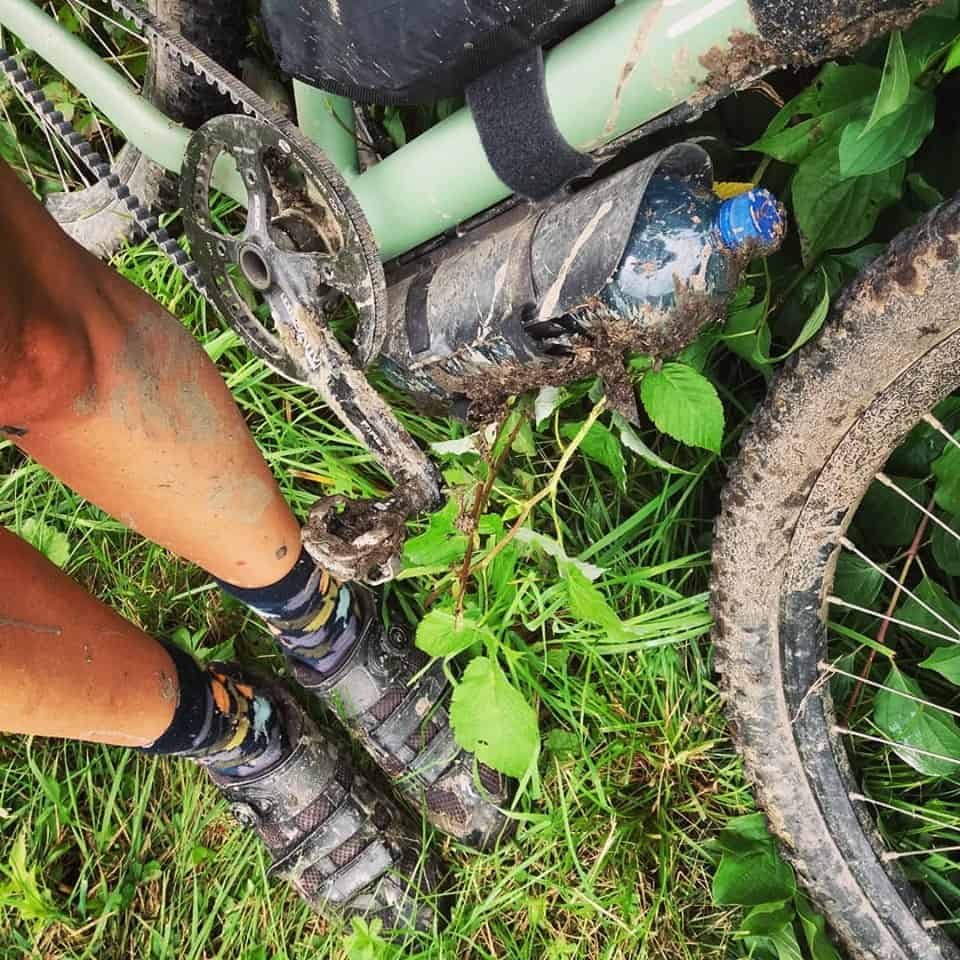