On the sofa, in the living room of my mum’s house in Tilburg, with the Tour the France on TV in the background, it’s hard to imagine that two weeks ago I was riding my bike in Honduras.
But I was.

I rode into Honduras after crossing through beautiful El Salvador. Honduras seemed a lot rougher then its neighbors. I didn’t really feel unsafe but I could tell that life in Honduras was harder and the Hondurans more hardened. I passed a wagon pulled by oxen and one ox dropped to the ground over and over, he was sick and tires I guess. The men hit him with a reed and the dogs bite his skin trying to drag him to his legs as the men stood there laughing. It was a painful sight. Honduras was less lively, less friendly and it was a big change when I crossed the border into Nicaragua. A host there told me that Nicaragua has no gang. Every sign of gangsters or gangs forming is reported to the police and acted upon. 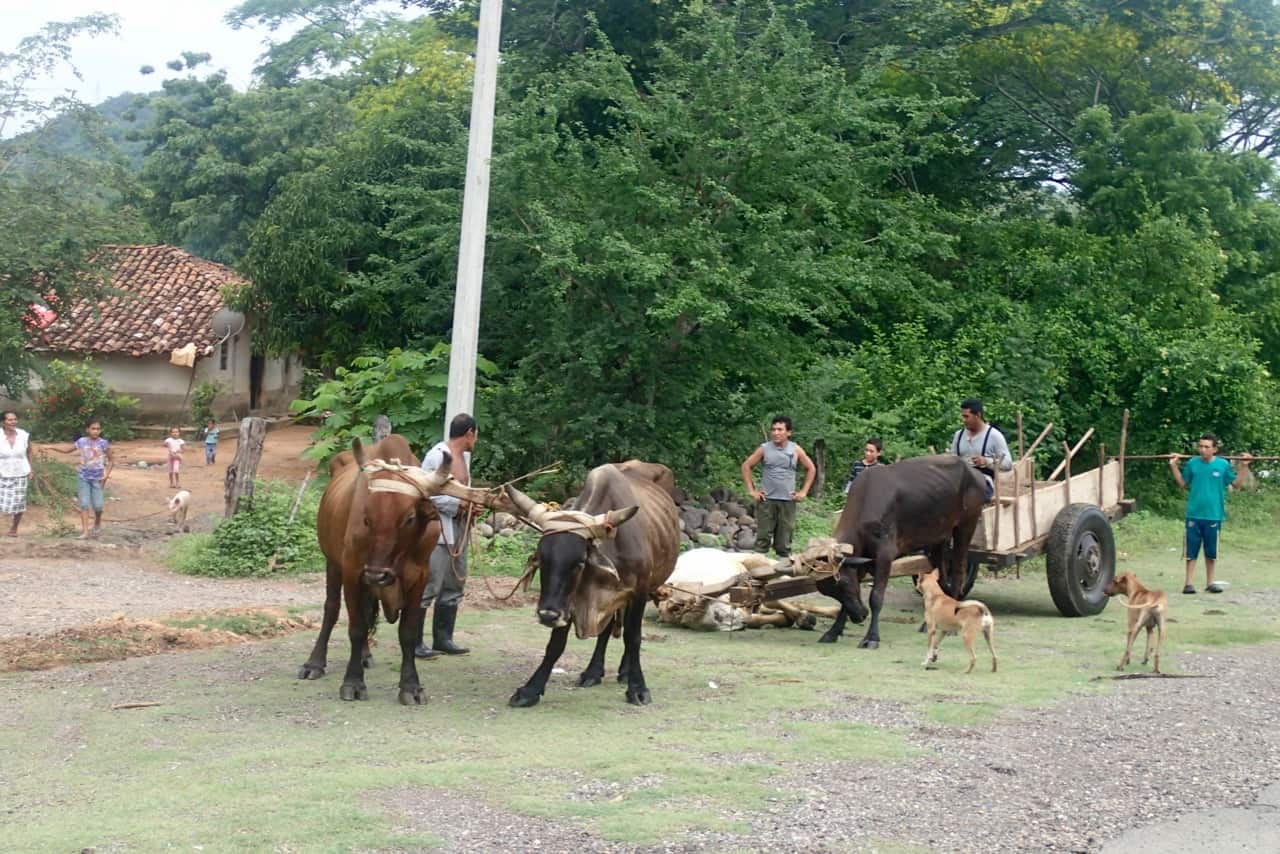 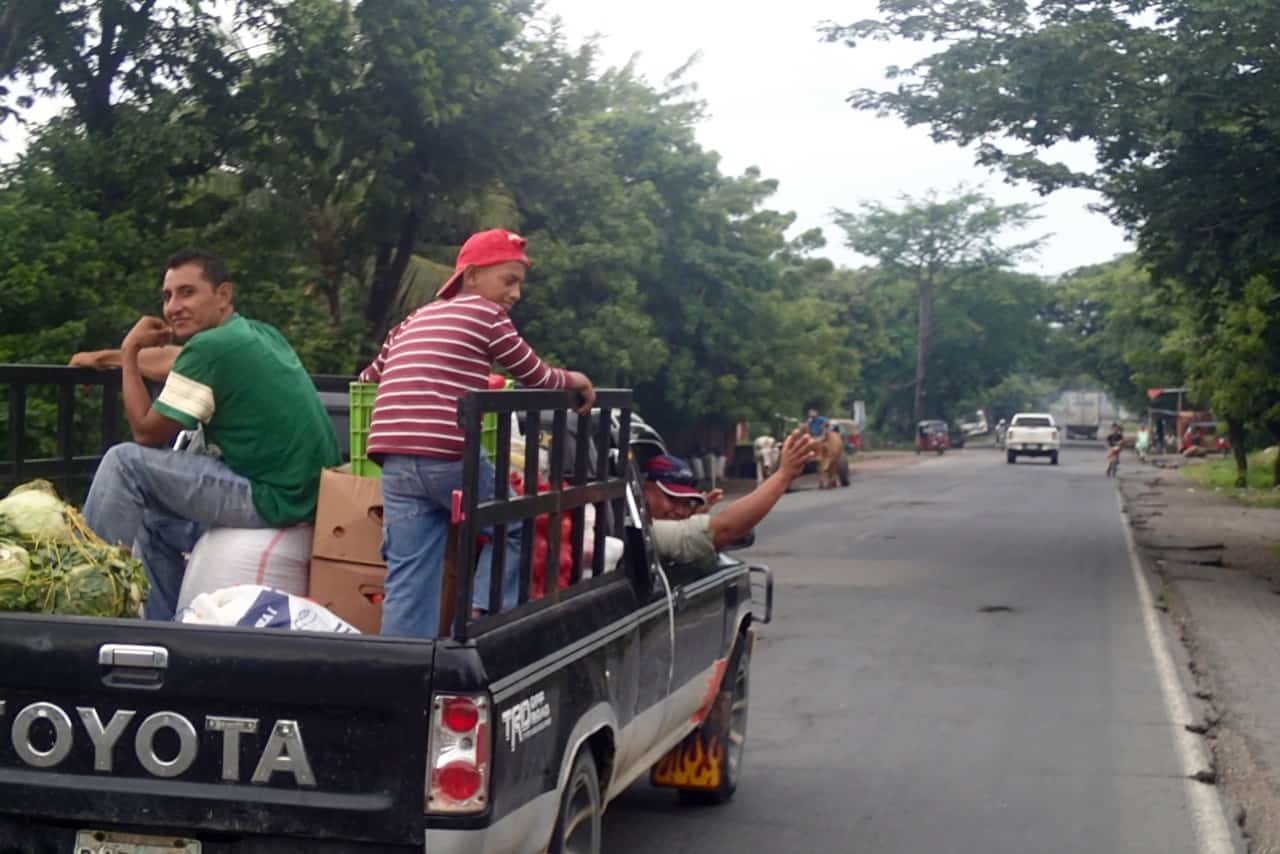 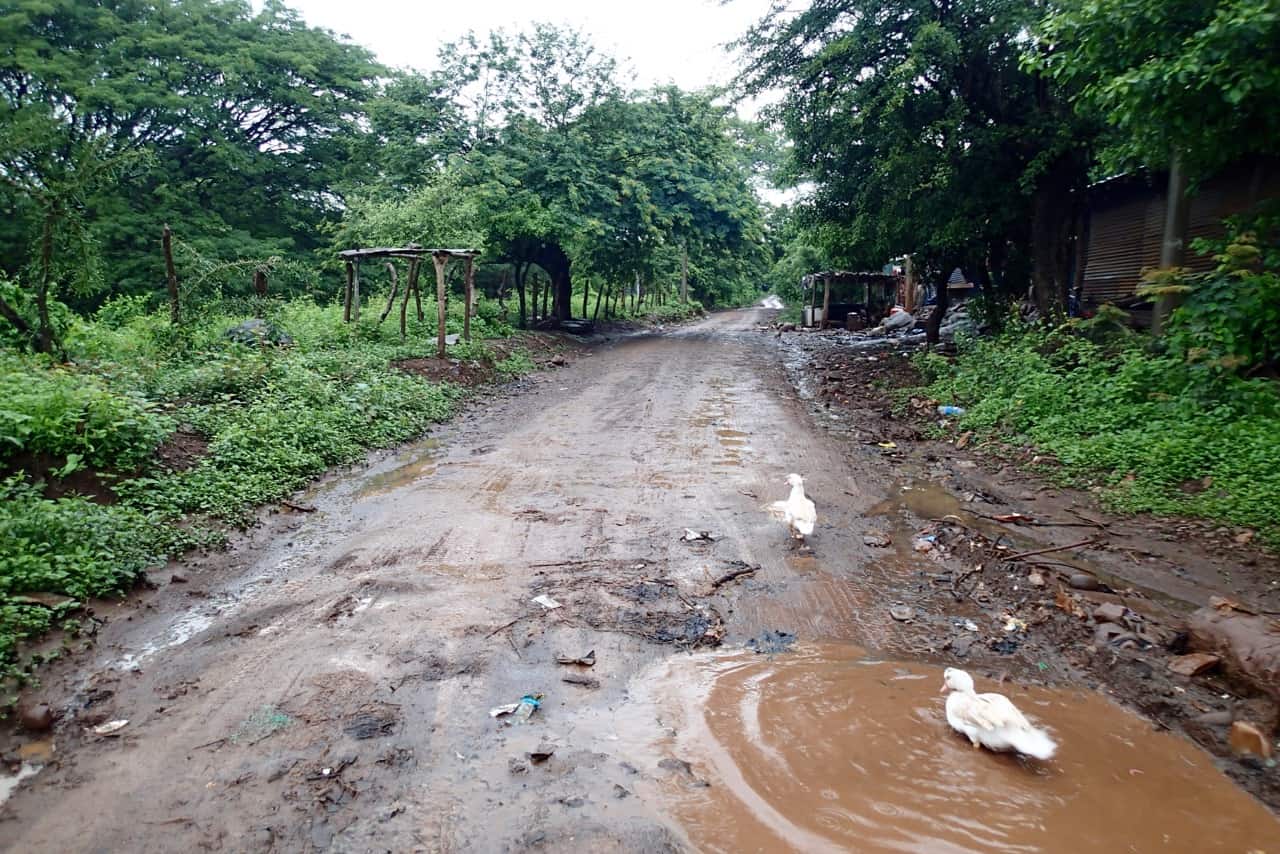 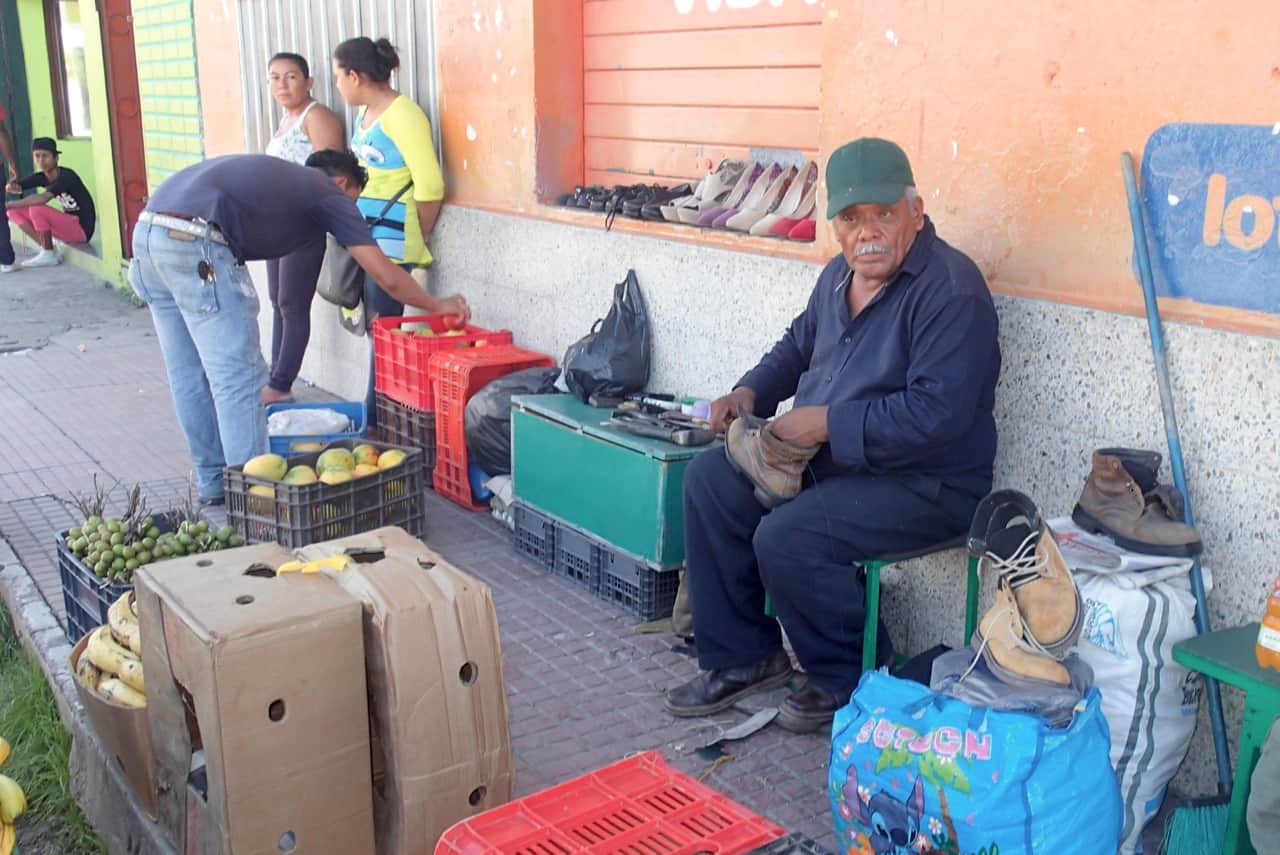 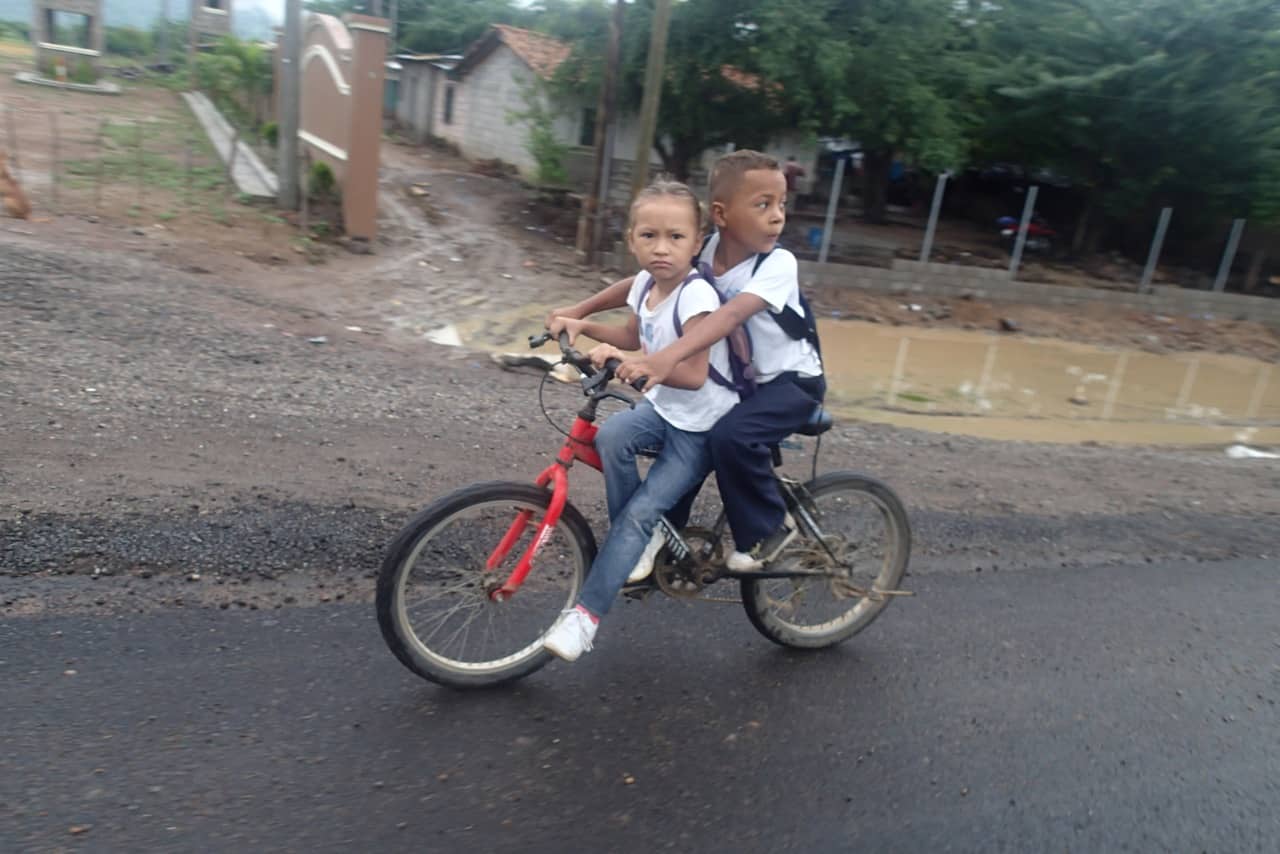 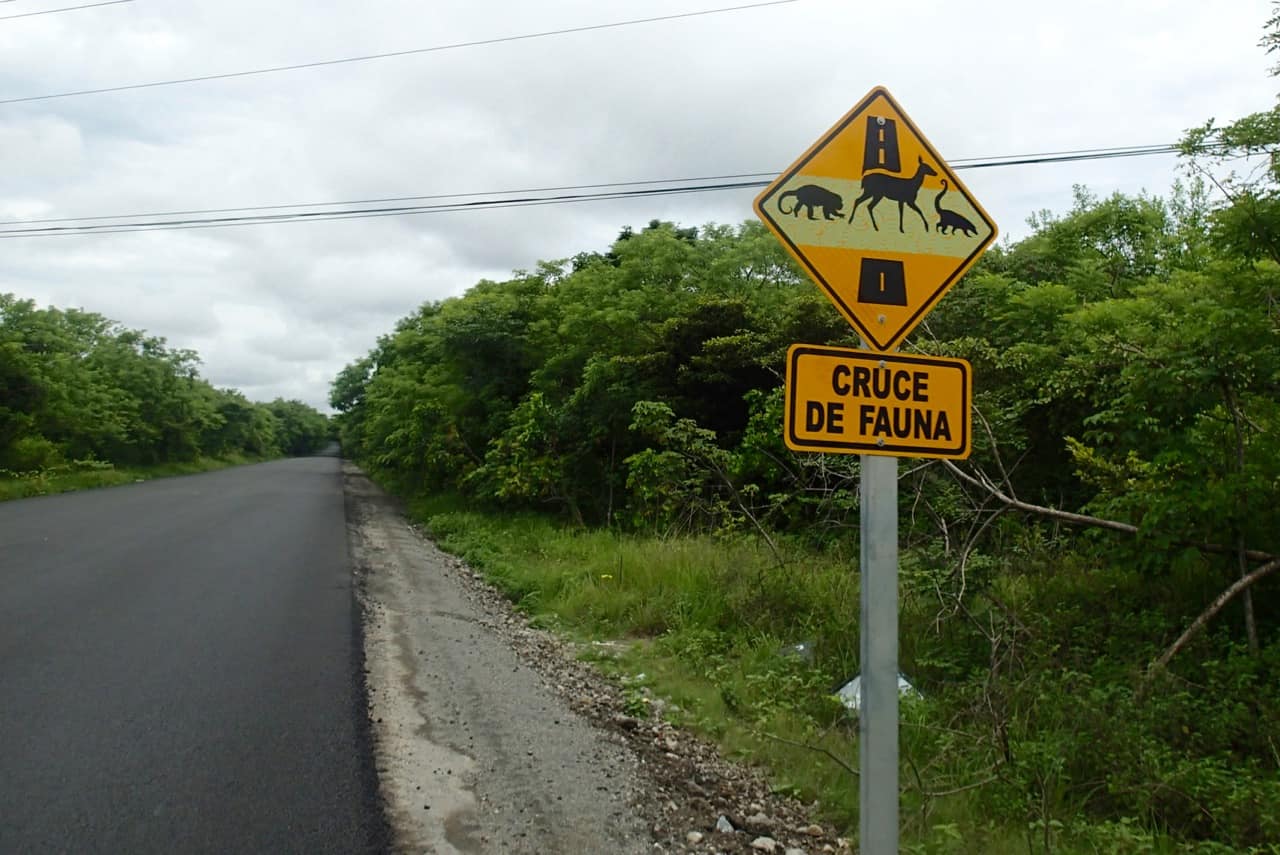 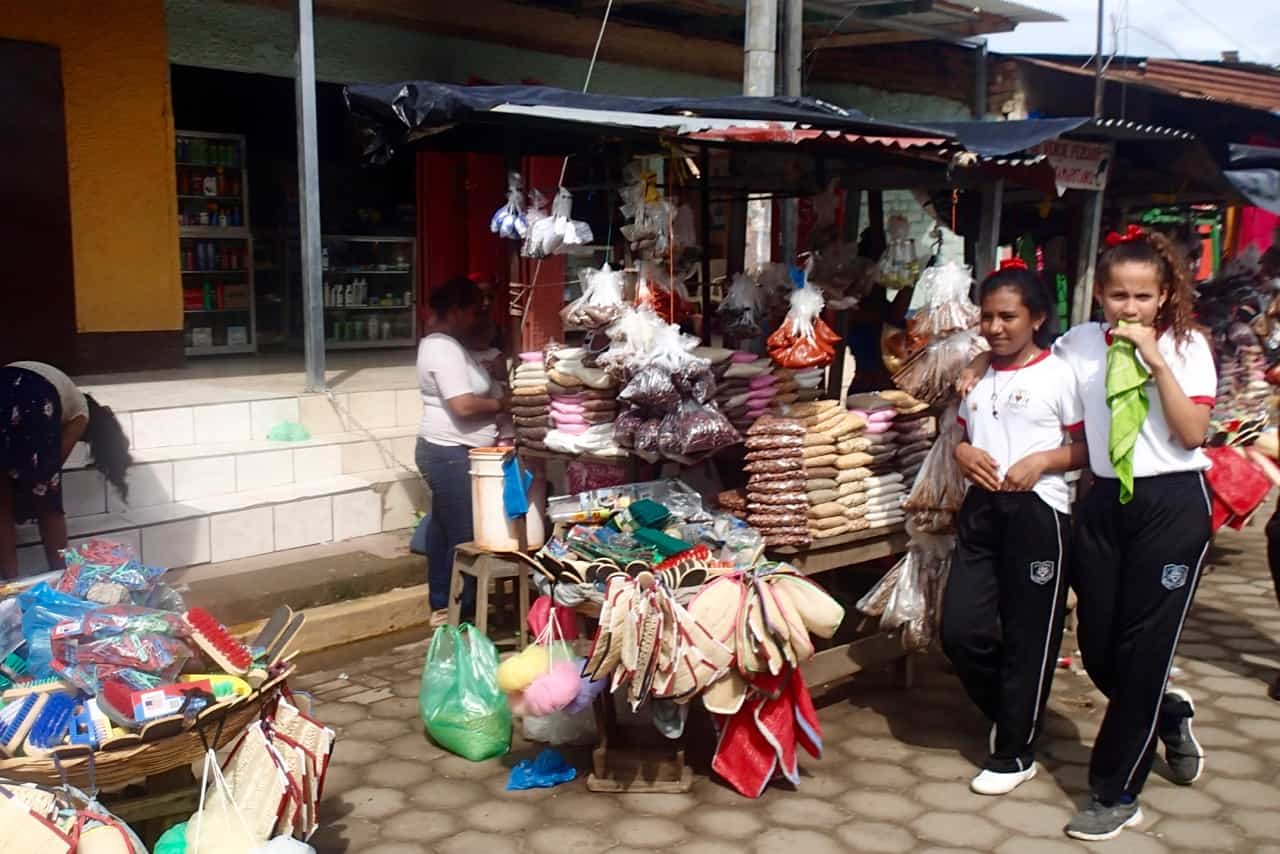 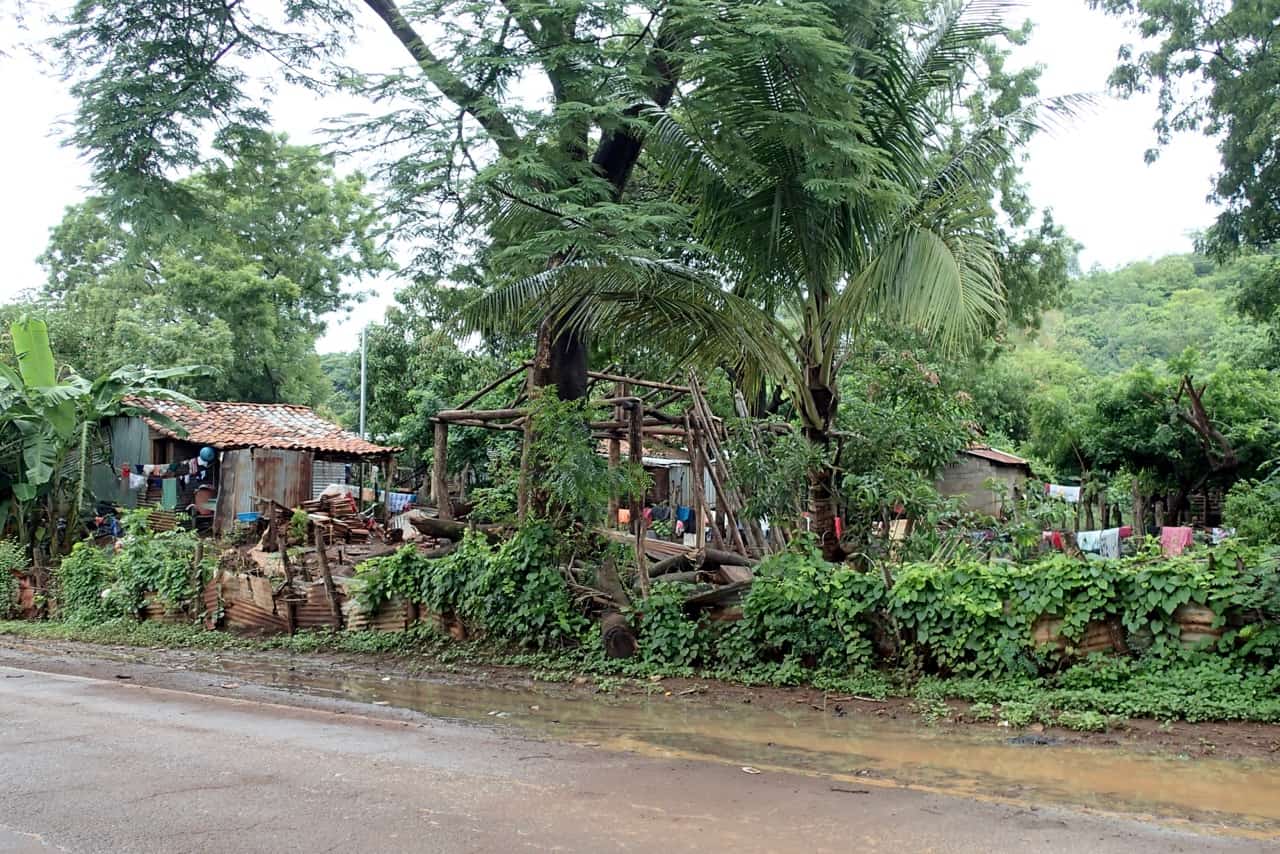 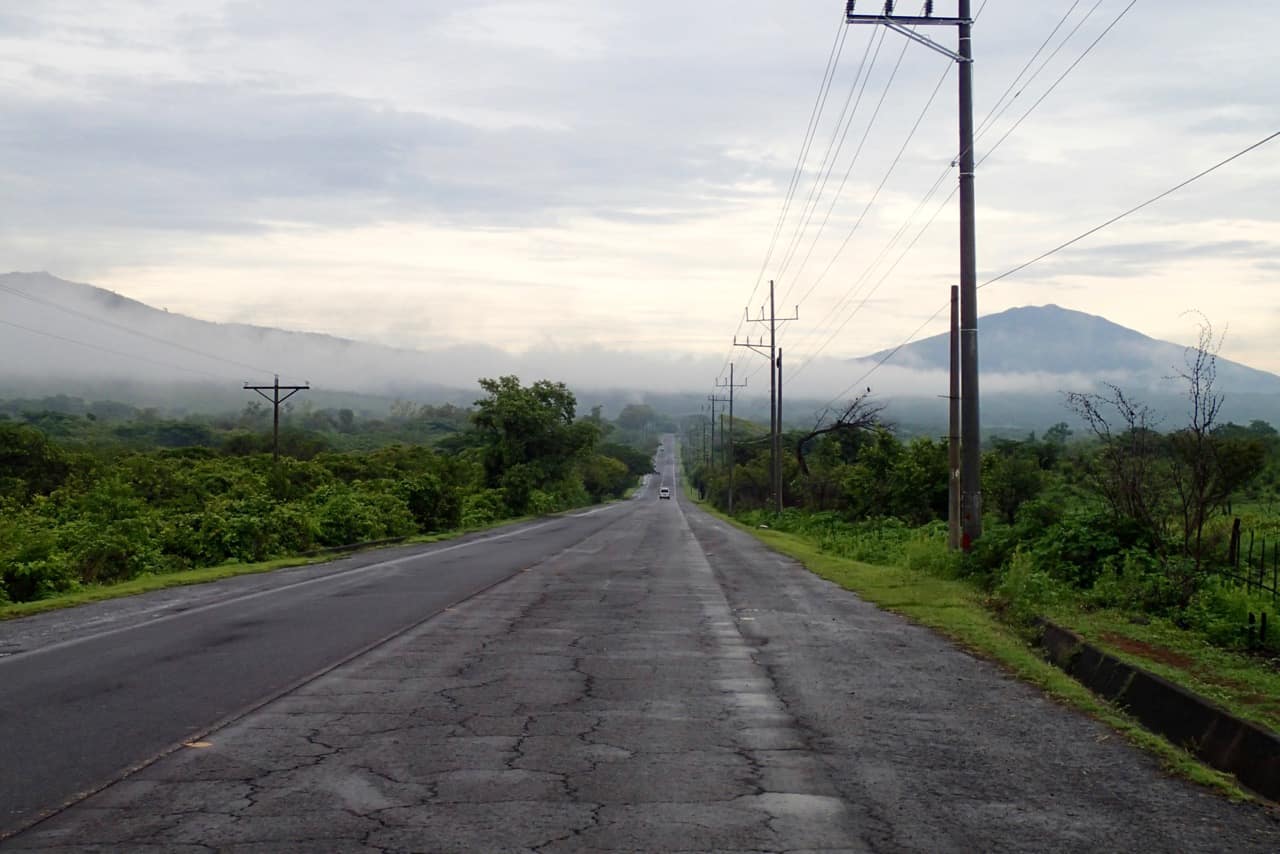 Looking back at Central America now I feel like I raced through. And in a way that’s true, even though it didn’t feel like that at the time. Something that very much made an impression on me was the ongoing unwanted attention from men. Even more now I’m far away I feel how much that marked my weeks there. I can’t deny that it worries me a little regarding South America. It doesn’t scare me, but it raises the question if I want to deal with that kind of annoyance at the moment.

In Nicaragua I got caught in several heavy rain showers on my way to Costa Rica. The morning of my last riding day it wouldn’t stop raining and I just didn’t feel like taking off in the pouring rain and ended up leaving hours later. A last day on the bike can swing two ways; either you want it to last forever or its heavy as hell and you want to get it over with. I planned 114 kilometers and they were heavy as hell. As if my legs decided that a 16900 something kilometers had been enough and this was one day to many. In the previous week I’d ridden several 100+ days with a maximum of 139km, my longest day on this trip.

In Liberia, the first city in Costa Rica, I had arranged to meet with Scott Hardesty. I met Scott for the first time in Banff at the Banff Mountain Film Festival. He took part in the Adventure Film Making Workshop and I was volunteering at the festival. For an assignment of the workshop he asked me to participate in a video he would make with three fellow students.

Encouraged by his teacher and many positive responses we decided to continue our collaboration. We met again in Death Valley where we spend three days filming. With the footage we shot there combined with the footage of Banff and my own camera Scott edited a trailer that we used send a pitch to a few companies looking for financial support for a bigger project. Only five weeks ago we got word from We Love Cycling (the bicycle related website by Skoda, that I write my blogs for) that they wanted to support us. Within a few days Scott and I made a plan and in the weeks after we prepared (while both on the road) and met in Liberia on June 21. Scott arrived with two heavy backpacks filled with cameras and I with a storyline and exhausted from a week of long riding days and the realization sinking in that after 13 months the pure bike travelling was over for a bit now. We toured around Costa Rica for a week filming the daily life of a bicycle traveler in Central America. We were guests with Jorge, a college friend of Scott, in the touristic coast town Samara and at the organic rice and sugarcane farm of Esteban and Irene near Cañas.

The last two nights we stayed at the beautiful hotel called ‘La Rosa del Paseo‘ of a Dutch bicycle enthusiast who also organises bike tours in Costa Rica. A real treat to stay in such a luxurious place in the final nights of my trip. We spend an intense week filming and brainstorming. After this week we split up and the practical part of postproduction is up to Scott now while I can only be of assistance from a distance to take part in the creative process. Our goal? To make a relatable short film about the ‘why’ of a bicycle traveler, this bicycle traveler, that’ll be shown at several adventure film festivals. We aim for a premiere at the Banff Mountain Film Festival, there where it all started. But those festivals are competitive and a screening is not guaranteed.

After a last rainy day in busy and ugly San Jose I left in the night for the airport with my bicycle and panniers packed and I (as always) nervous if my baggage would exceed the weight limit.

After a comfortable but exhausting flight I walked into my mother’s arms at Schiphol airport.
The train ride home started authentically Dutch with an hour delay and the sadly familiar announcement of a ‘collision with a person’ (suicide). 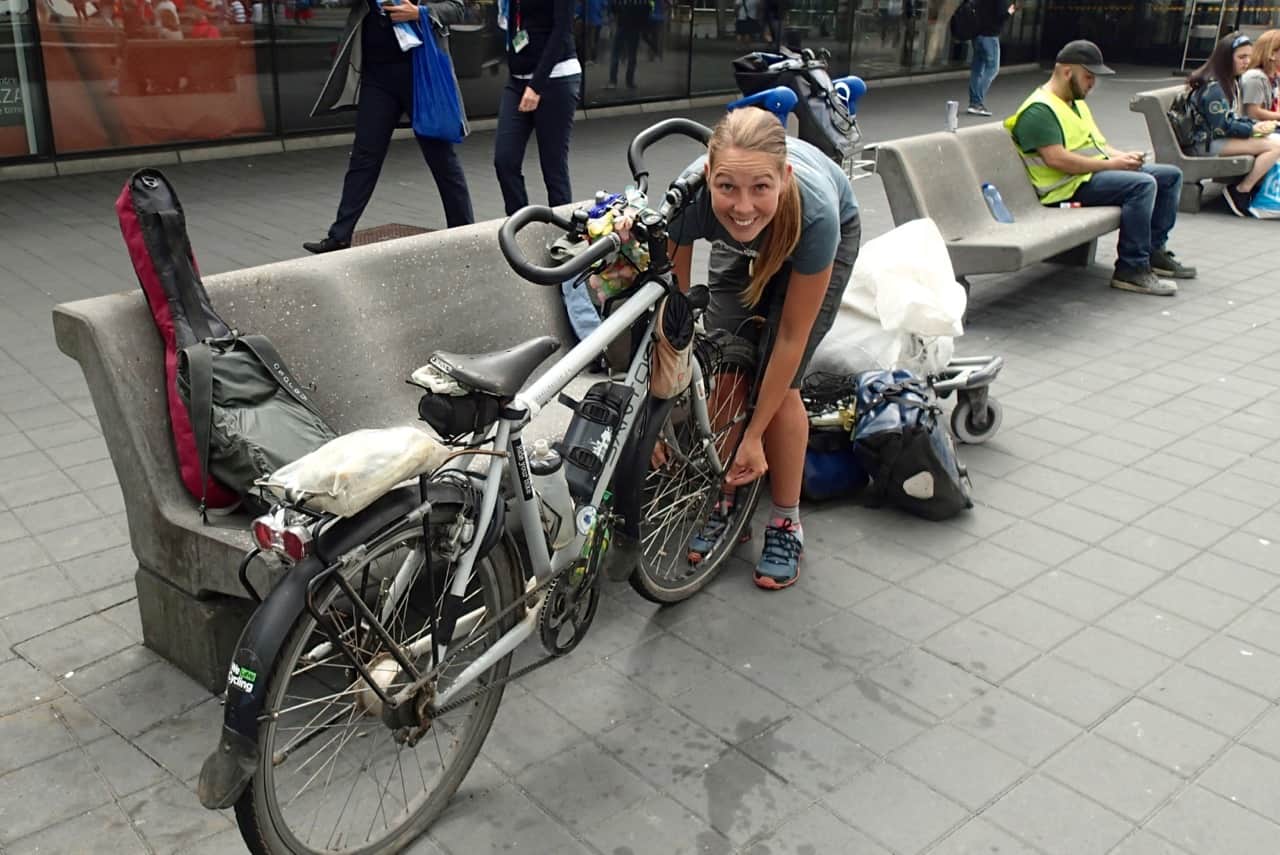 The responses to my ‘return‘ to the Netherlands vary. To my surprise a lot of people seem very surprised that I flew home. Many seem to think that I’m ending my trip and some even seem a little disappointed in me.

While travelling I regularly meet (bike)travelers who haven’t been home for several years. I could never imagine becoming one of them. I chose to live my life on the bicycle for at least a few years, but that doesn’t mean that I won’t visit my homeland, family and friends every now and then. No matter how special and intense some of the friendships are that I make on the road, only a few people back at home know me through and through, including my past and my cultural roots. I think it’s important to keep investing in those relationships, even when I live my life on a bicycle around the globe.

I was on my way to Ushuaia, but when I realized I wasn’t gonna arrive there within two years’ time I decided to fly to the Netherlands for a visit more or less halfway. But once I purchased the ticket I realized that there is nothing and nobody who obligates me to continue my route south. If I want to start off in a different direction, there is nothing that stops me. I flew home with a one-way ticket and the intention to stay in the Netherlands for two months. But where I’ll fly or ride to after those 2 months is unsure for me too at the moment. In my fantasies I’m cycling in Africa, Canada, north and eastern Europa, South-America, Mongolia… Well, all options are open.

Now I’m back in Tilburg it feels as if I’ve never left. For an outsider like me it seems like nothing changed here, while I know that just as well as on the road, everything here too is subject to continues change.
I’m gonna take some time to acclimatise and let the realization sink in of what I’ve done this past year, while writing a presentation about the trip and assisting Scott from a distance in the postproduction of the film.

In my next blog I’ll look back on the entire trip and maybe I’ll be able to tell you something more about the continuation… but that is, like I never know the sequel of my blogs beforehand, just as much a question to me now as it is to you.