In 2016 I took a turn.
An unsigned turn without a street name, an unpaved road not to be found on any map or GPS.
Without certainty about where it would lead, what the surface would be like, if it could be a dead end road, have side trails or be just a detour bound to join the main road again.

Nonetheless I knew it was my turn-off. Inshallah!
On a small post close to the ground hang a small improvised sign. An arrow to the left, saying ‘HERA‘. Did I put that there? Or..? 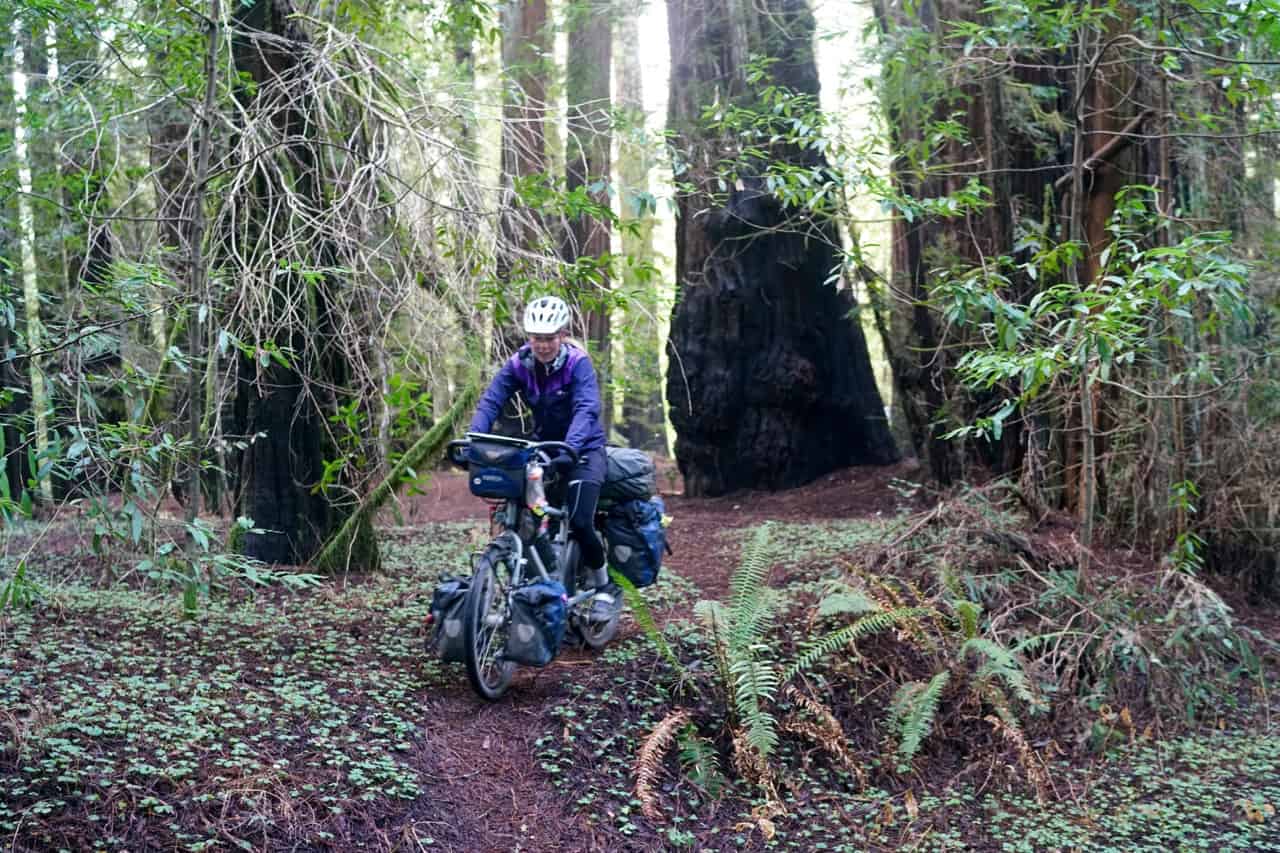 31 december, 2016, Newyearseve. Nevada City, CA. USA
While my family and friends in the Netherlands are watching the ‘oudejaarsconference’ (one man comedian theater show in which the past year is ‘discussed’) with a bowl of ‘oliebollen’ (Dutch doughnuts), I still have most of the last day of the year ahead of me.

I am in Nevada city, California. After a few days of crossing the flatland around Sacramento, I gained 800meters of elevation over 32km heading towards the Sierra Nevada.

My last blog I wrote in Eureka, soaked and tired after pushing along the beautiful but wet Oregon coast. Just south of Eureka starts the Redwood National park.

Where the Red Woods start you can take a turn-off off the Highway 101 to the ‘Avenue of the Giants‘. A quiet road that meanders through this forest of mastodons where cyclists sometimes ‘may use full lane‘.
Golden rays of sunlight shone through the canopy of the centuries old sequoias. Surrounded by these fairytale-like mammoth trees I felt like a little gnome. Some trees are hollow and you can stand inside the trunk. Other fallen trees had a root bulb so big I could test my rusty climbing skills. 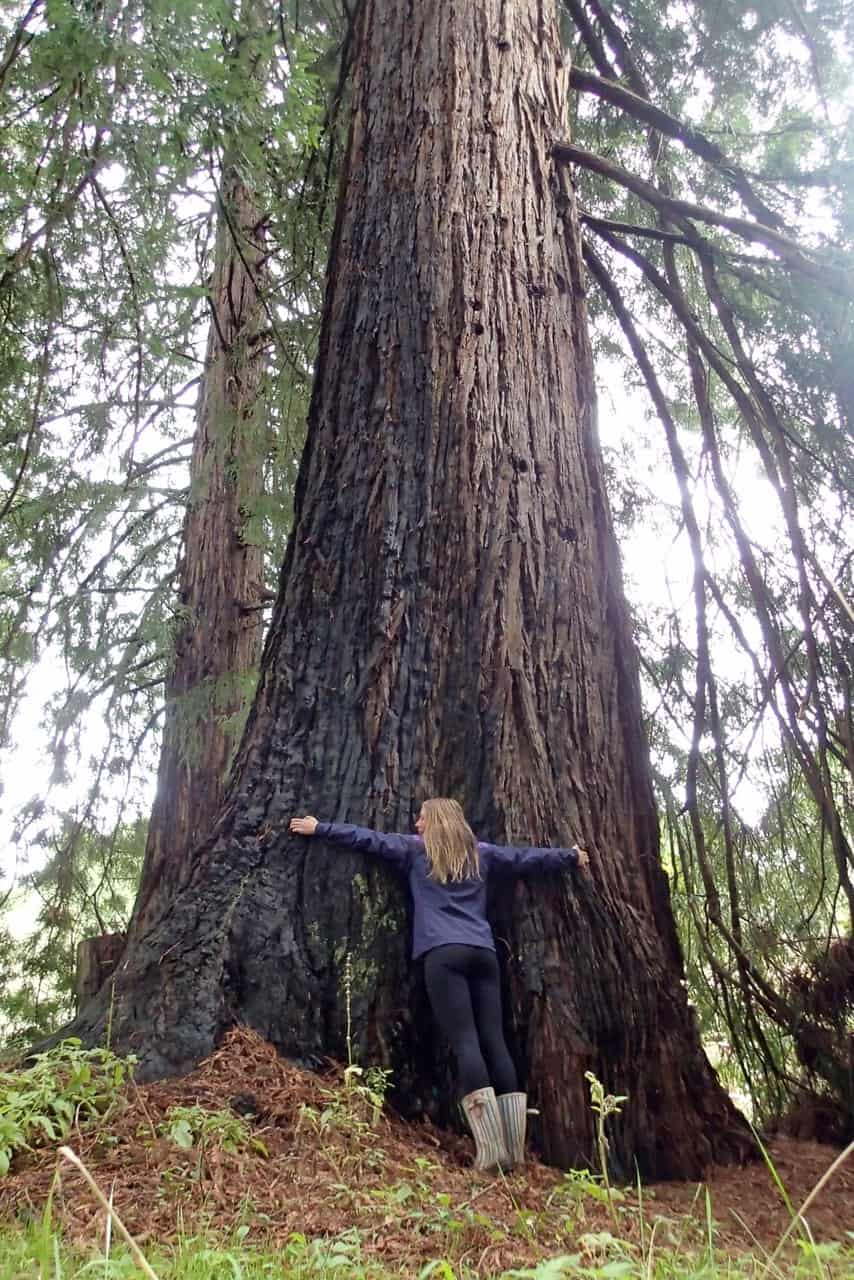 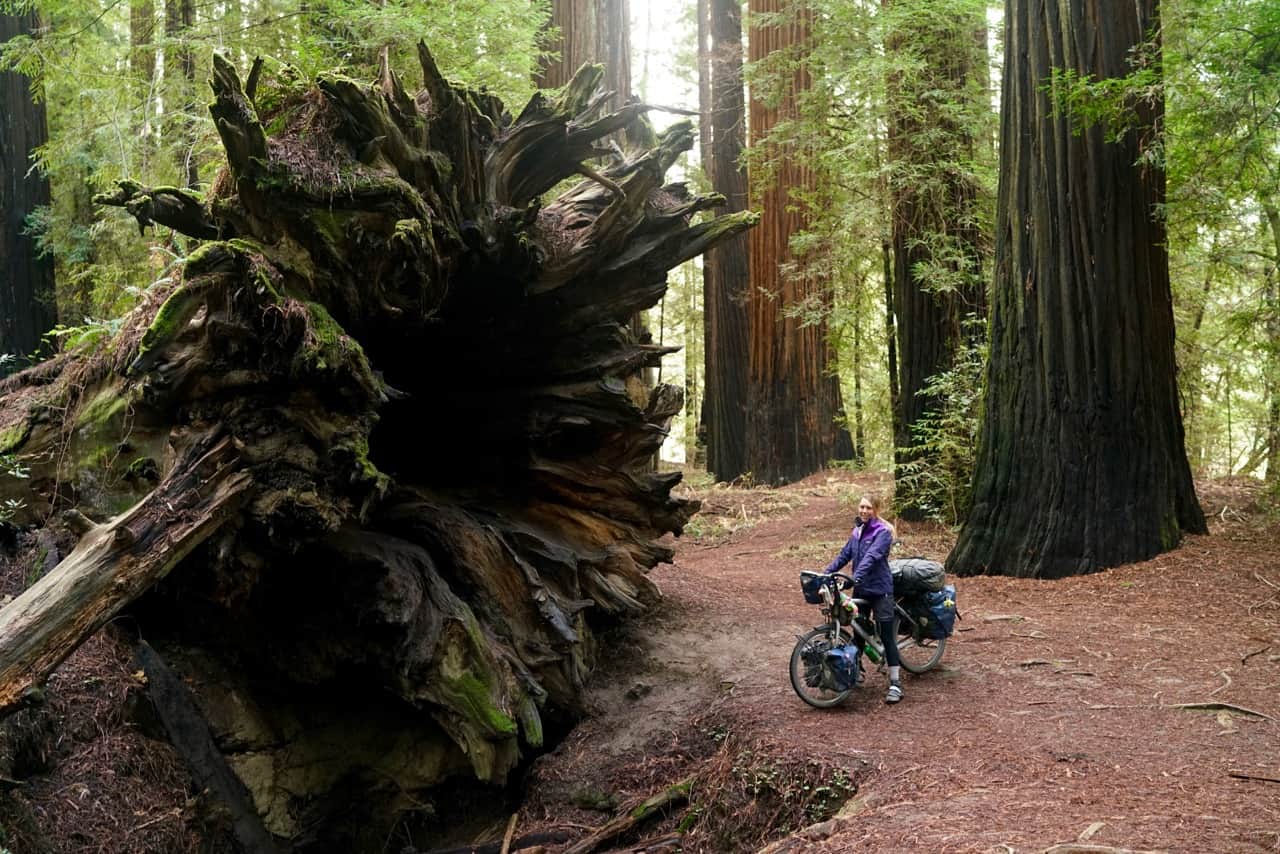 After a long climb, a magnificent descent dropped me back at the coast, the Californian coast this time. The first glimpse of the ocean, the rocks and cliffs took my breath away. It was late in the afternoon and the sun stood just a tad above the waterline that created a knife sharp horizon. As the sky coloured orange Shaun and I pedaled on looking for a place to pitch camp. After a few more kilometers we found the most beautiful unattended campground we could’ve wished for. Just picknick tables, fire pits and grass on the top of a cliff. As the sun set I quickly jumped out of my bikeshorts and t-shirt and into a double layer of insulated trousers, three tops, a downjacket and my cap. Sun down, temperature down. The sky was incredibly clear and we decided to leave the tent packed and sleep out in the open air underneath, what soon would be, an incredible starry sky.

The days along the coast we remained blessed with beautiful weather. The only day the grey rain-loaded clouds returned was the day we biked across the Golden Gate Bridge into San Francisco. The wind pulled and pushed us as we biked across the iconic red steel construction. A small island in the distance was the only place that got hit by some rays of sunlight breaking through a whole in the deck of clouds. Alcatraz! 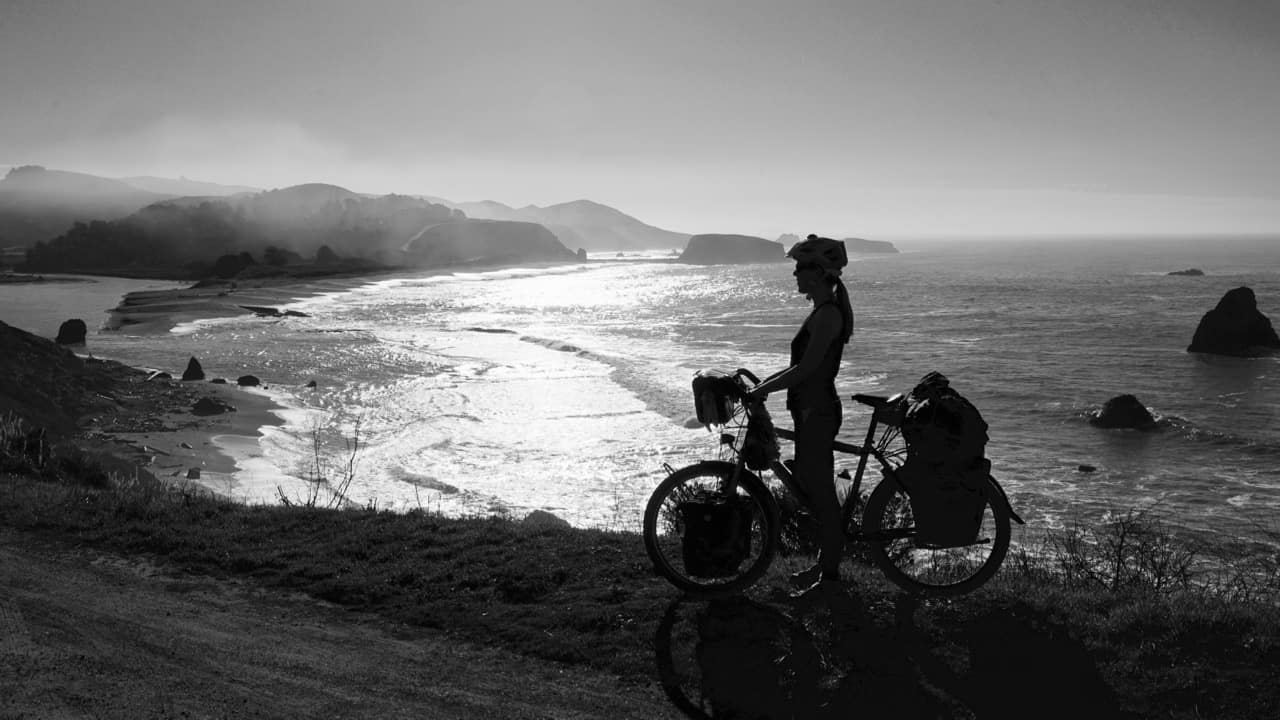 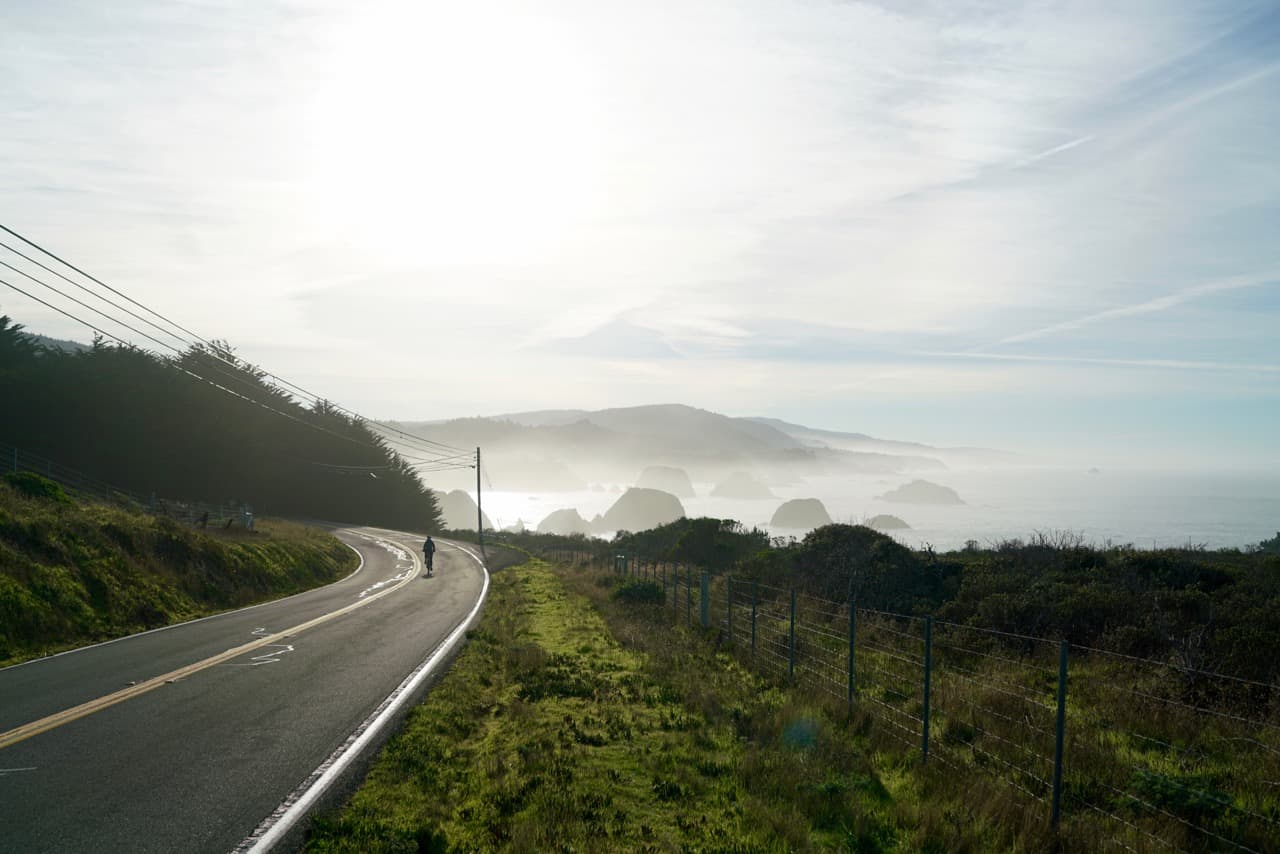 In San Francisco we stayed at the house of a cyclists couple I met two years ago at the border crossing from Tadzjikistan to Kyrgyzstan. Sadly they were away for the holidays and we didn’t get to meet again, but they let us use their apartment. Wonderful!
By that time Shaun and I had been on the road together for over 5 weeks and covered quite a bit of ground. I was very ready for a few days off the bike.
On december 24th we visited Alcatraz. We went grocery shopping to get us through Christmas without having to leave the house and gave in to unembarrassed laziness. We forsook to do planned chores, like: wash sleeping bag, fix breaks, fix zipper, wash jackets, write emails and filled christmas day with eating (and cooking) good food, watch movies and relaxing.
On december 26th I peeled myself of the couch to explore San Francisco and on the 27th we got back in the saddle, rested and clean, to head north-east. 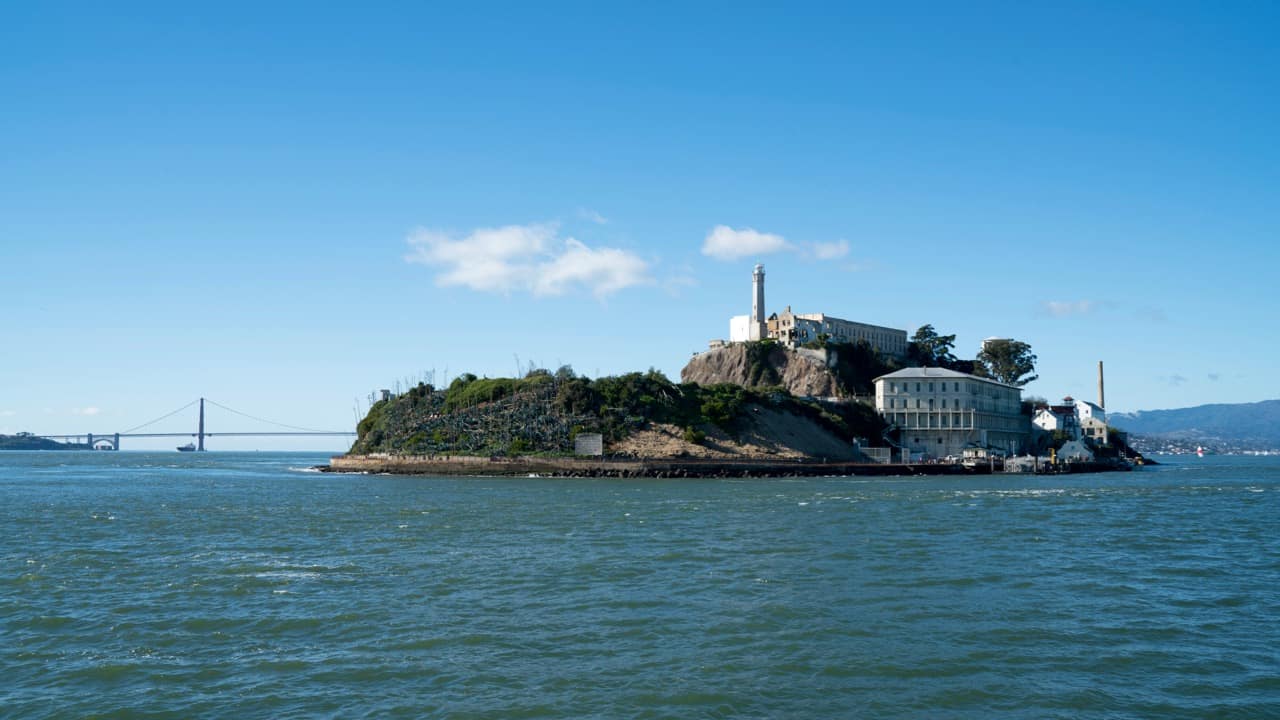 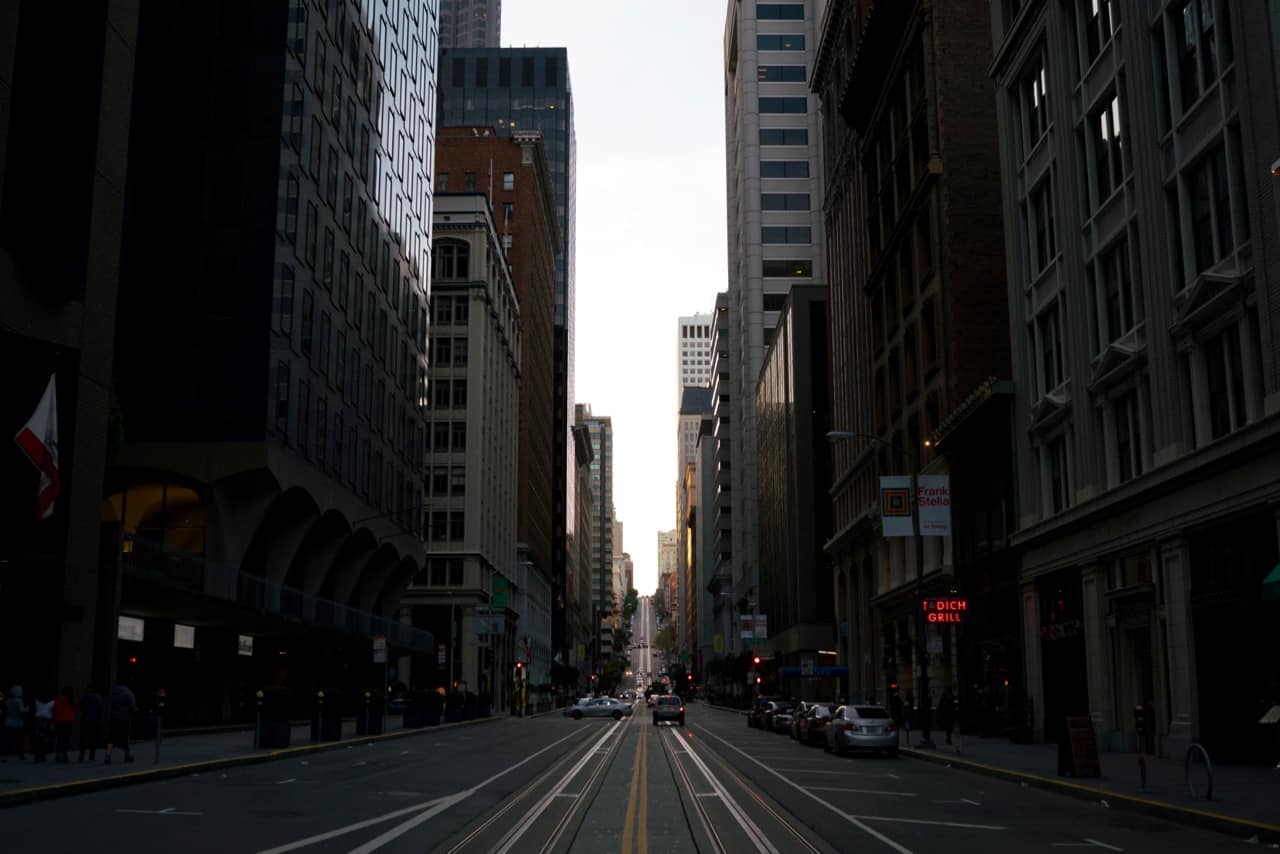 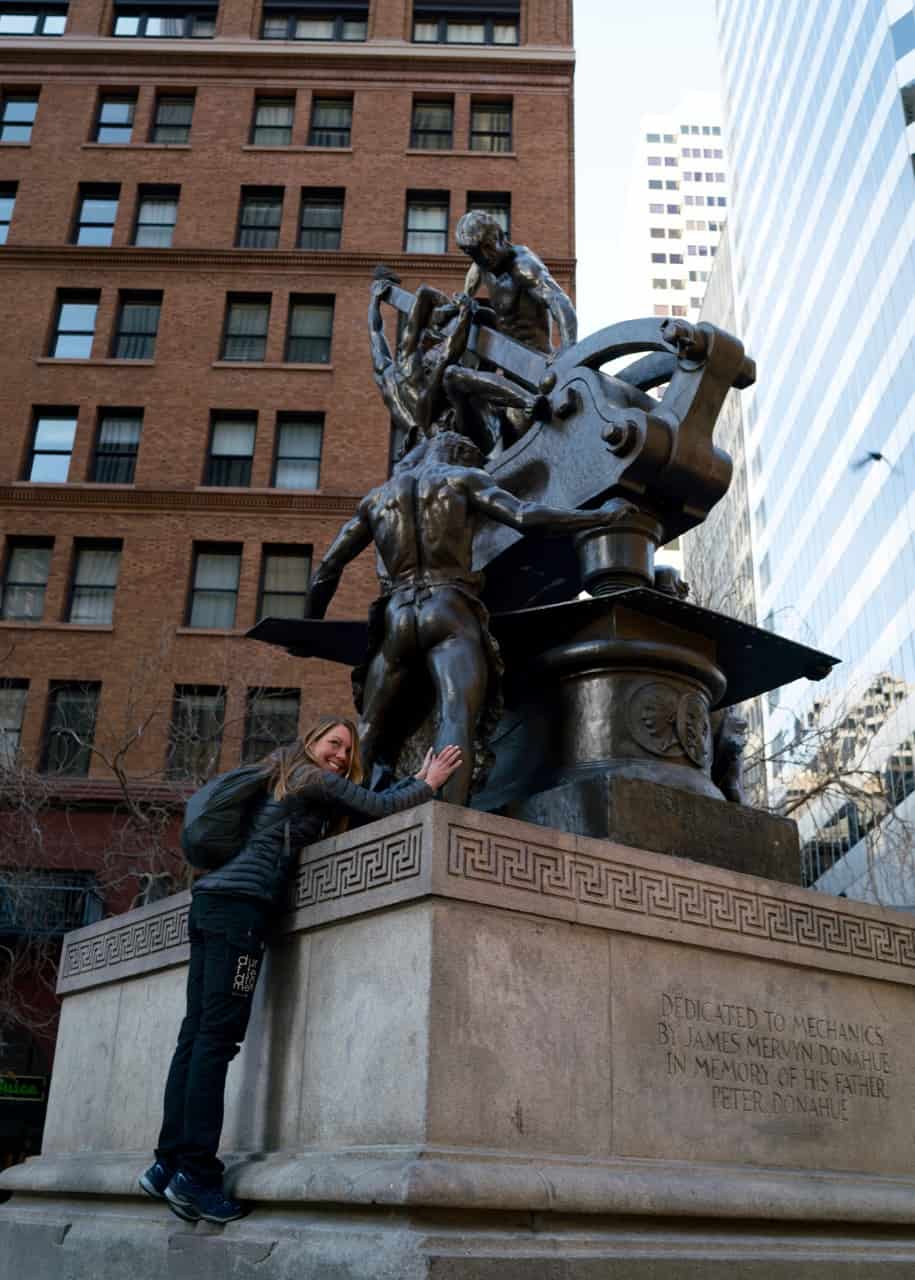 The America I crossed between San Francisco and the Sierra Nevada reminded me of the America I’ve seen in some movies. A grid of long straight roads that cut through endless farmland. The agriculture in Yolo-county mainly exists of nuts and tomatoes. Apart from that outside pretty much every farm you’ll find some citrustrees, from which we picked some (last) ripe tasty fruits. 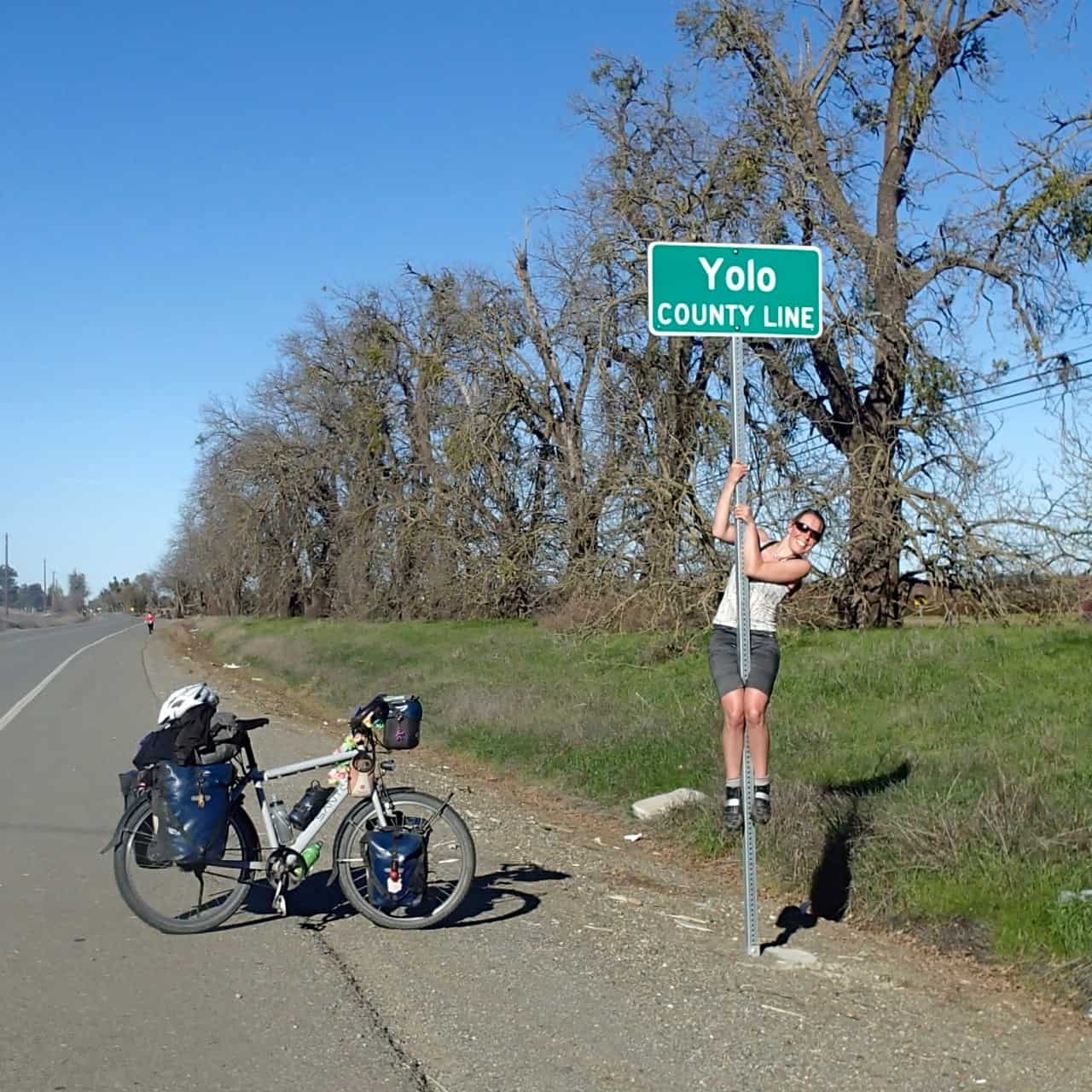 This New years eve (in the Netherlands we call it ‘OLD years eve’) Shaun and I are taken out for sushi. Quite a treat! We’re guests with Vic and Joy, an older couple Shaun met this summer in Canada. We’ll probably roll into the new year quietly, catching up on our much needed sleep.

In the next few days there’s some weather coming in, according to the forecast and from wednesday on the ‘coldest weather since five years’ is predicted for the Sierra Nevada. With the Donner pass at 2151m ‘for breakfast’ and a 500km route through Yosemite National Park that fluctuates between 1600 and 2400 meters altitude, this new year might just start with an adventure.

In 2016 I took a turn.
No signposted detour that would guide me along some touristic sights and drop me back at the highway. No ‘Avenue of the Giants’ off the HW 101.

In 2017 I’ll continue my journey on the path that I took in 2016 and that over the last 7 months became as familiar to me as my Brooks saddle, tent and handlebar bag. I still don’t have a map that shows that route, but retroactively I document every turn, obstacle, campspot and encounter on and along the route.

Recently I added Instagram as one of the means to do so. There I regularly post pictures with a short update.

Two days ago, exactly 7 months ‘on the road’, I pedaled my 10.000th kilometer since the start of this trip.
I hope to bike the 20.000th km in 2017 and look back on every single one of them with a big smile of satisfaction.
One of my resolutions is to, also in this new year, let you share in my adventures and my life on the bike, on that path, that turn, with destination unknown.

I WISH YOU AN ADVENTUROUS, FRESH AND LOVING 2017!