‘You haven’t been gone that long yet..‘ my brother said to me on the phone this morning, as we casually discussed when I might be in the Netherlands again. Amazing how perception of time can differ. Thinking back of leaving my studio in Tilburg, now 7 months ago, and the morning of my departure, it feels eternity. While in fact I celebrated my ‘6 months on the road’ just two days ago. Half a year, not ‘eternity’ by far! The more intense experiences, the more memories, the slower time seems to go by. It shows.

Since my first day biking after Banff the battery of my speedometer has been dead. I’ve been biking for 2,5 weeks without being able to tell my speed or exact covered distance. I just keep postponing buying a new battery thus evidently it has very little priority to me. The longer I’ve been gone the less the covered kilometers seem to matter to me. The last number I saw was +-6.800km and google maps tells me that I’ve done about 1.500 ever since.

By now I’ve made it to my fourth American state. From Canada I entered Idaho, that I swapped for Washington state after just three days and two days ago I crossed the Columbia river into Oregon.
Four? Alaska of course.

The ride from east to west through Washington mainly led through farmland.
After a bikeday in the rain I arrived in Davenport, a village amidst the big plains of cornfields and rolling hills. ‘Wilderness camping’ wasn’t an option seeing the lack of wilderness and I biked around looking for a campspot on the edge of town. I found a nice piece of grass and ringed the doorbell of the nearest house. A man opened and seemed struck by surprise with my question, though he agreed and even showed me to the well-insulated unfinished workshop where I could roll out my mat for the night.
A little bit later he (Clay) stood in the doorway there with his wife (Lindsey) and kids to visit with me. I settled in the workshop putting my warm clothes on and sat down with a hot tea and a book. Not much later he came back to put up a blanket to keep the warmth in and again a little later I was in the house with them enjoying a slice of pizza. This young family was astonished about my trip and the fact that I picked their house to ask to camp. The trust that grew within just 12 hours was heartwarming and the next morning we had breakfast together. A day later Lindsey wrote a very honest and beautiful post on Facebook about our meeting and the reactions of her friends to it were just as great. 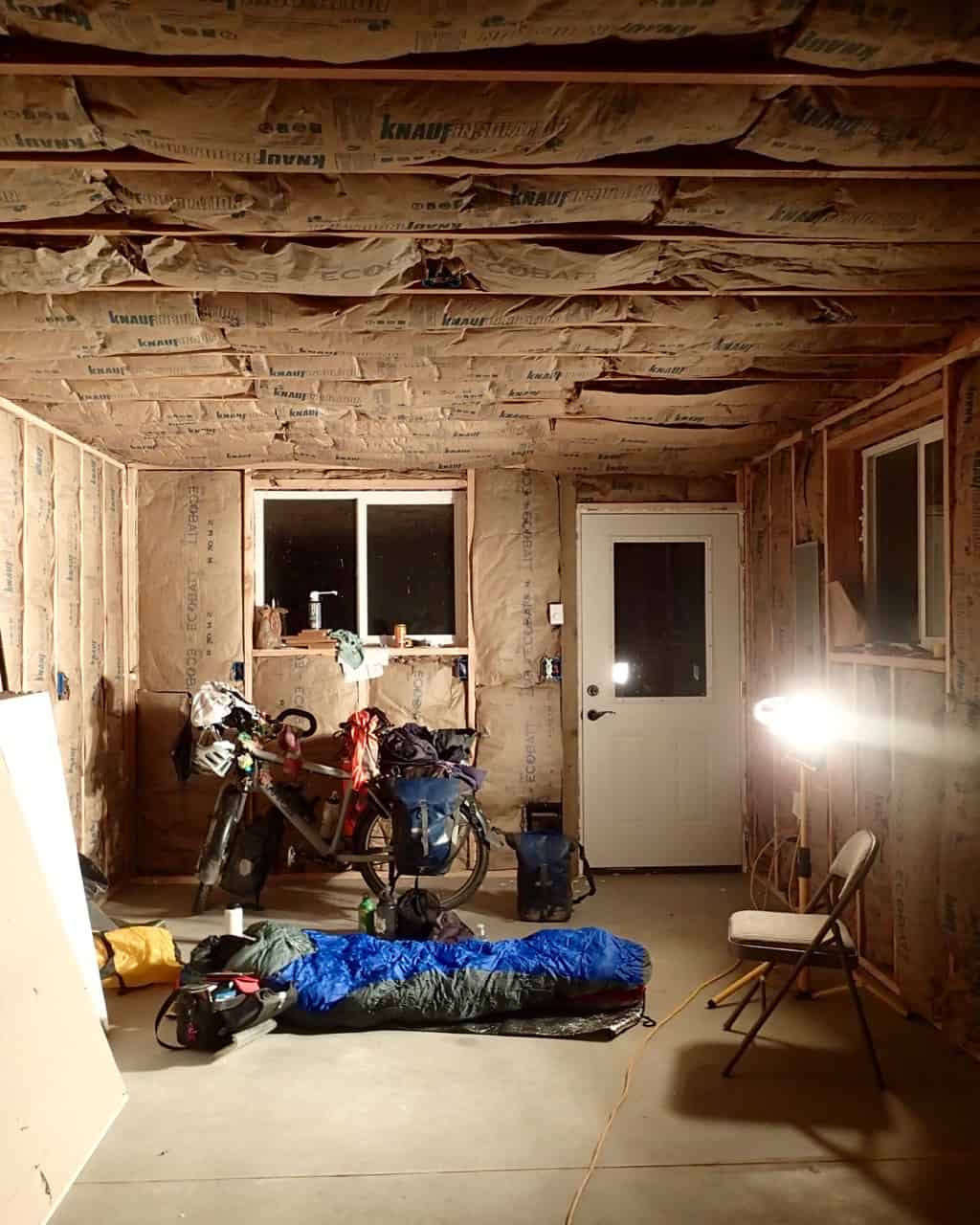 On both ends of this 250km farmland is a city, Spokane in the east and Wenatchee in the west. In the first one I stayed with Trevor, in the second with Scott. Remember that I spend the night before my birthday camping with three guys on the campsite in Jasper? That’s them! What a great feeling to just ‘drop by a friend’s place’ as I’m biking around the world.

That’s also how I got to head towards Ellensburg, where I was invited to celebrate Thanksgiving with Jennifer and Dave, a couple I met in Anchorage, and their family.
After a ride through the apple orchards of Wenatchee (the ‘apple capitol’) to Leavenworth I cycled towards Blewett pass. After about 20km the ‘old road’, that I was planning to ride, divided from the main road. The main road was busy and had a slippery shoulder, since the snowplow had only plowed the lane. On the old road was a thin layer of fresh snow and on it the tire tracks from just one car only. I felt the resistance of the snow under my wheels and considered if I really wanted to take this road over the pass. How deep would the snow be on top of the pass? Would the road get so steep that my wheels would slip? On the other hand, it was to good to be true, an old winding road over a pass with be beautiful fresh snow all just for me. I decided to take this old road.

The narrow road meandered up the mountain. I saw tracks of deer, elk, rabbits, (probably) a lynx and a bear in the fresh snow. Noticing that last one I decided to dig up my bearspray from my pannier and put it back in the little bag on my handlebar. It was totally quiet and I let the bearbell on my pannier jingle to let the bear, wherever he or she was, know that I was around.

At 5 p.m I arrived in the dark in Ellensburg after 105km.
Thanksgiving is an even ‘bigger deal’ here than Christmas is. The nice an unique part of this holiday is that it’s none-religious and therefore for everybody.
The story goes that Thanksgiving originated in 1621 when the English arrived in Plymouth (USA) on the Mayflower and their harvest failed. The indians offered them help and food at the time. Thanksgiving became a holiday to be thankful for the good harvest. Nowadays it’s mainly a holiday on which families come together and have lots of tasty food and enjoy each others company.
The Wampanoag indians, who over the years after the English arrived lost most of their land and people to them, consider Thanksgiving as the start of a tragic period. Every year with Thanksgiving they come together in Plymouth to commemorate this sad day.

As for me, I was invited to join Jennifers family who celebrated Thanksgiving in a traditional way with stuffed turkey, prepared by ‘grandma’ and card games in the evening.

A few days later I met Shaun (www.chasingthesunrise.org), the English cyclist I’d formerly met on Denali highway, who visited me in the hospital in Jasper and with whom I camped for a night in Banff.
This time we actually planned to meet to ride together for a bit.
The (bike)days are short and the evenings long in this winter months with a sunrise at 7:30 a.m and sunset at 4:30 p.m. The days are grey and rainy. A good time to enjoy some company on the road.

On our first bikeday together we rode into Yelm in the rain after 50km, where I noticed posters for the musical ‘Spamalot’ (Monty Python). Quite impulsive we decided to check what time the musical would be on that day. It turned out to just have started and we were welcome get the student discount and sneak in. We parked our bikes in the theaters tiny kitchen and minutes later we (me with my rain pants still on) sat in the audience watching Spamalot by the local musical club of Yelm. I was pleasantly surprised by the level of the performance. As we left the theater at 5 p.m. it was dark and we set up camp underneath a shelter in the town’s park. 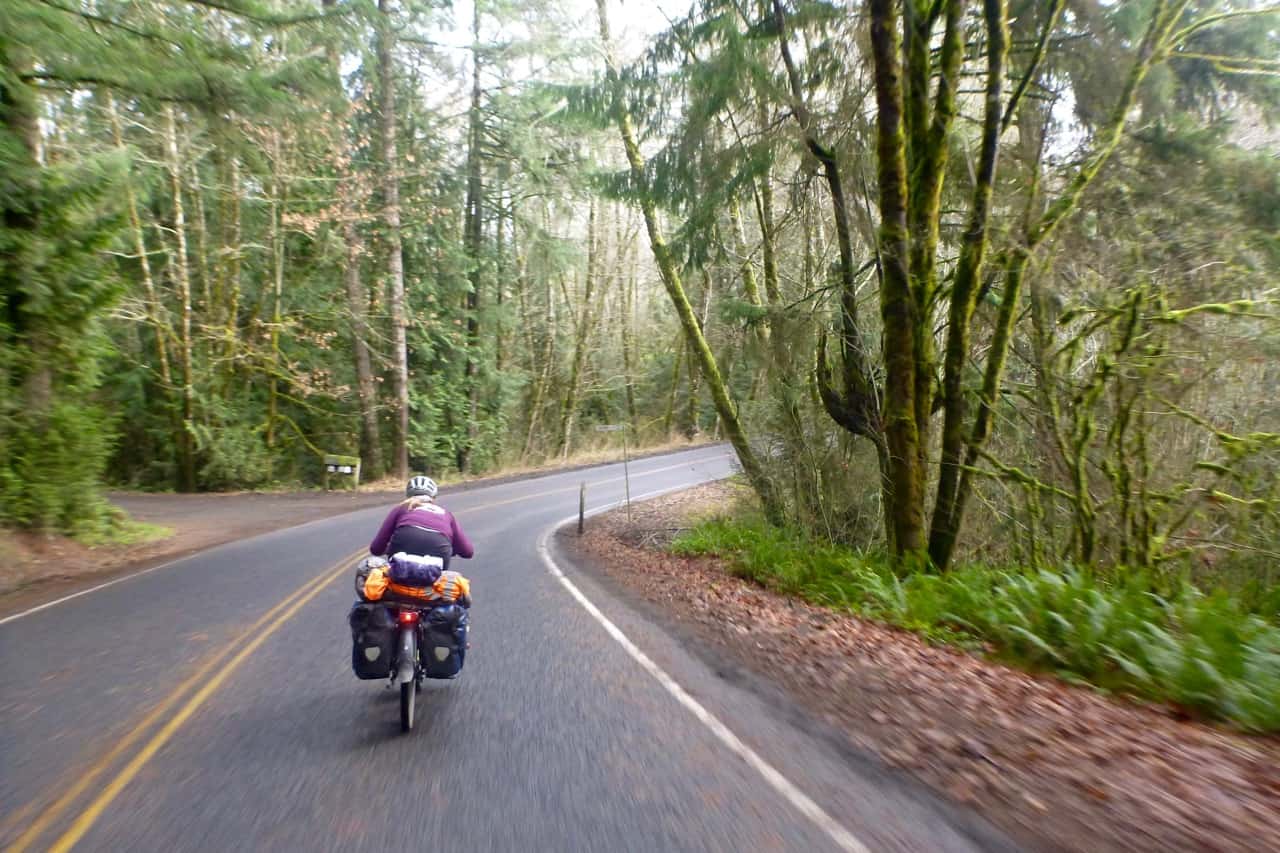 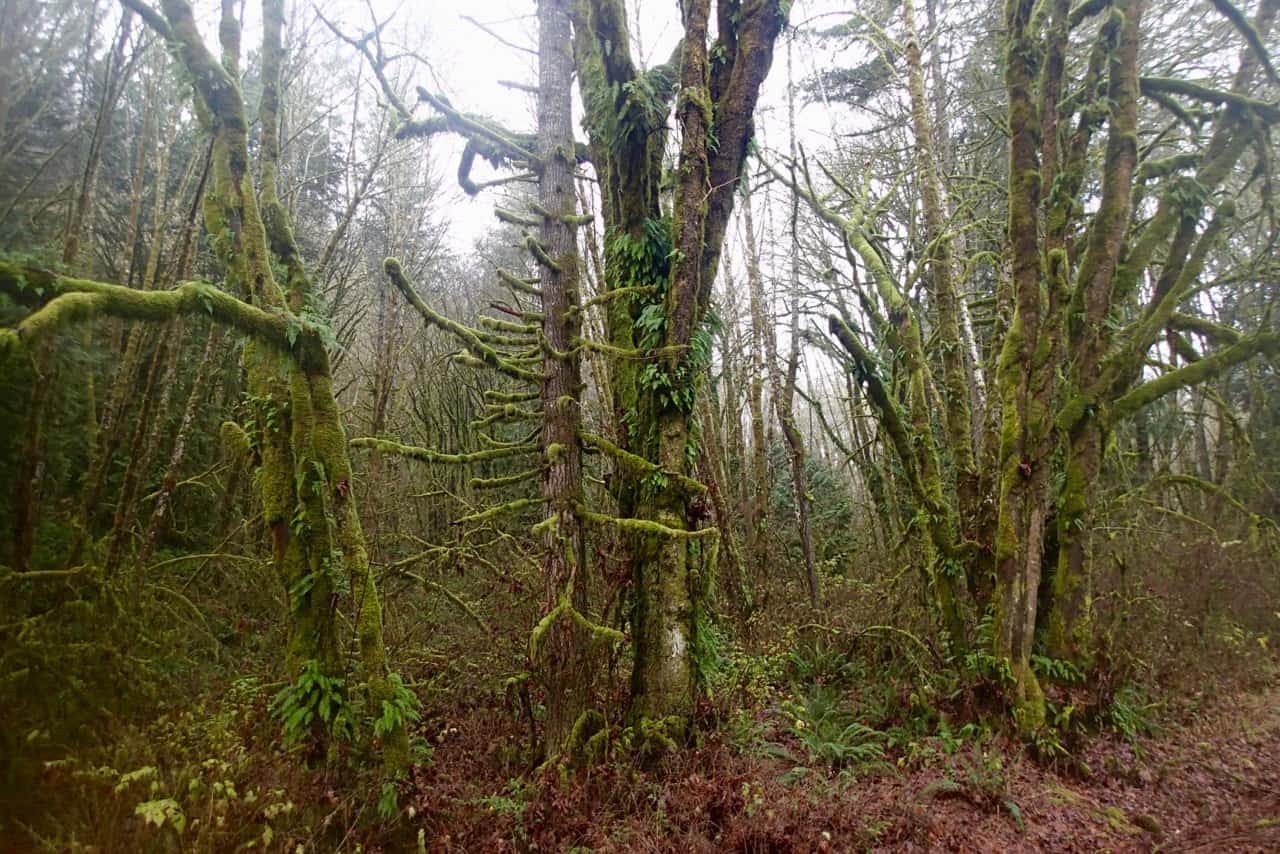 Two days ago, at a different shelter in a different park (in the village of ‘Vader’) a policeman stopped by in the evening. He was curious, but to my surprise he didn’t ask for our passports or our plans to stay there for the night or keep going. Apparently a situation as such at this time of year is unique enough not to have or conduct a policy for. 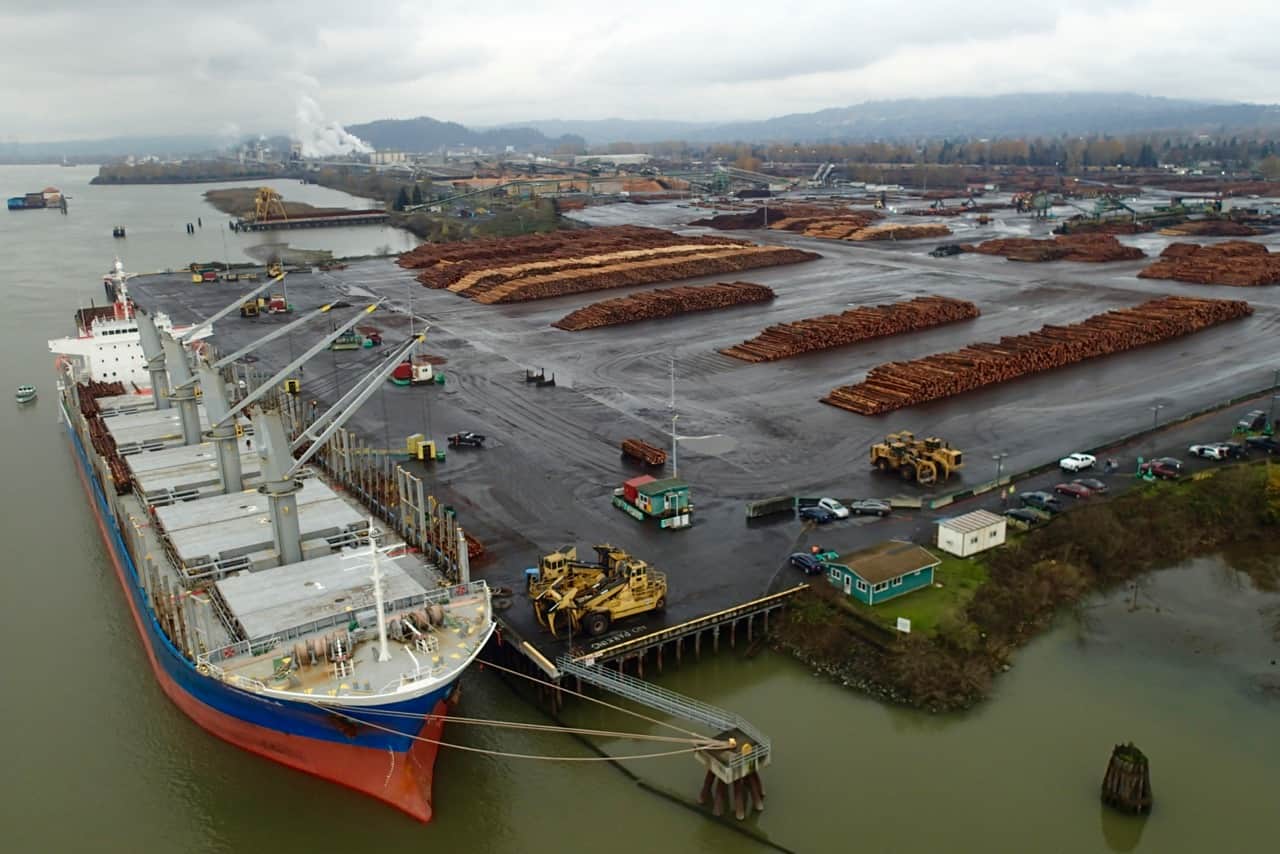 6 months on the road. Where will I be in another 6 months? Colombia? Ecuador? Peru?
Who knows..

Right now I am in Portland, ‘the’ bike city of the USA.
And I know that in the next two days we’ll cross the ‘Coast Range’ to the Pacific Ocean.
The next two weeks we’ll head south along the coast, passing lighthouses, sea lions, beaches, ships.. and who knows what.
But more on all that in the next blog..