9 days, that’s how long it took before I felt good enough to get back on the bike.
9 days in which I felt a little bit better every day, but in which my head would still go a bit hazy and blurry in the evenings. At the end of those 9 days my consciousness seemed to have settled, my headaches were pretty much gone, I had purchased extensive health insurance and my body felt steady again.

I want to thank everybody for their encouraging messages and the donations to support me to overcome this setback!!

Together with my host Bruce I got started on the Icefields Parkway two weeks ago.
Finally!
We were gonna make short bikedays (60km). Taking it easy.
As we started biking I still felt a bit worrisome, but with every turn of the pedals I regained trust in my body and mind. It felt good to be outside again in nature and to put up my tent in the open air. Make a fire, read a book and crawl into my sleeping bag for an early night in one of the closed campsites. 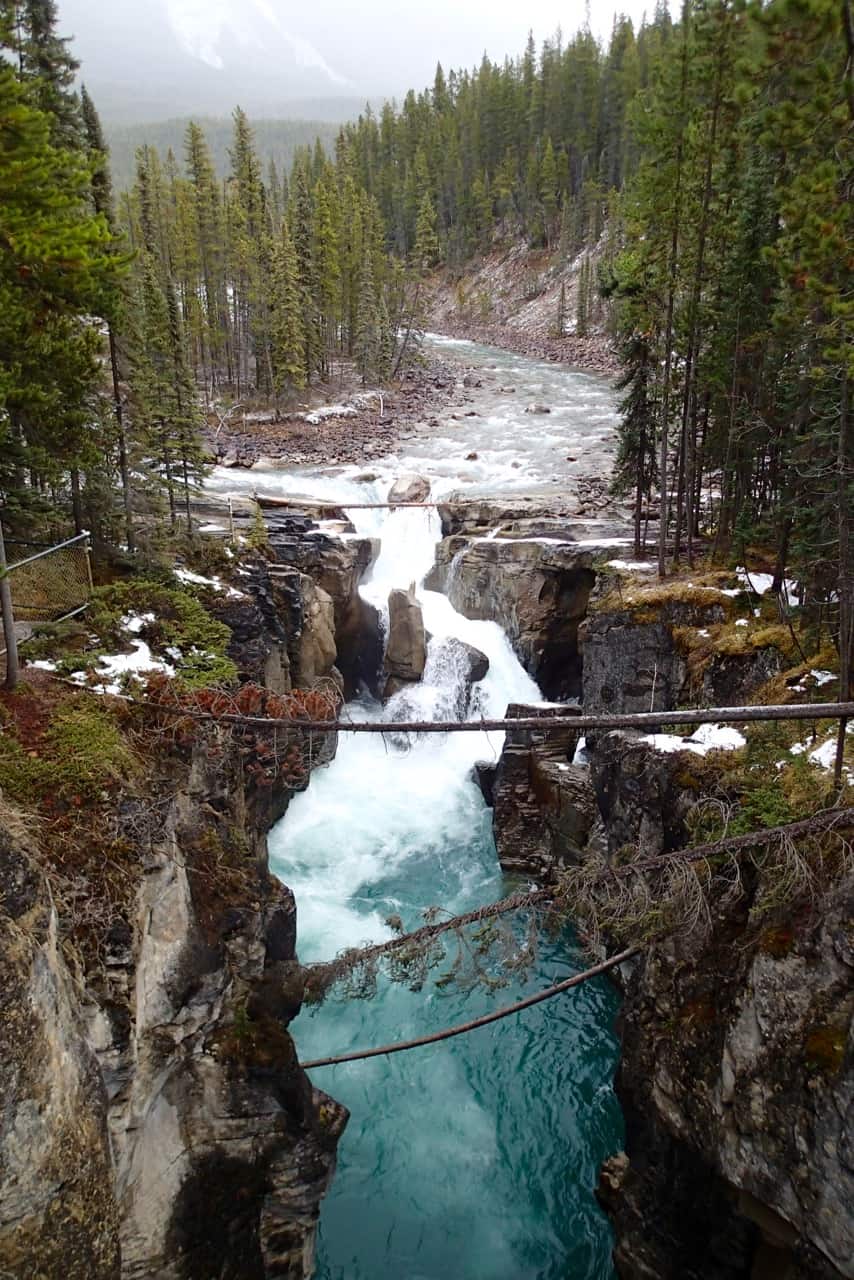 At day two already THE ‘Columbia Icefield‘ was on the menu. As we biked up towards Sunwapta Pass it started snowing lightly and a strong wind picked up. Reaching the Columbia Icefield in snow and wind, only two days back in the saddle, reassured me that I was ready to bike again. The circumstances were bleaker then I’d expected but all I could feel was happiness to be back on the bike and healthy.

Here’s a short video I shot at the Icefield. 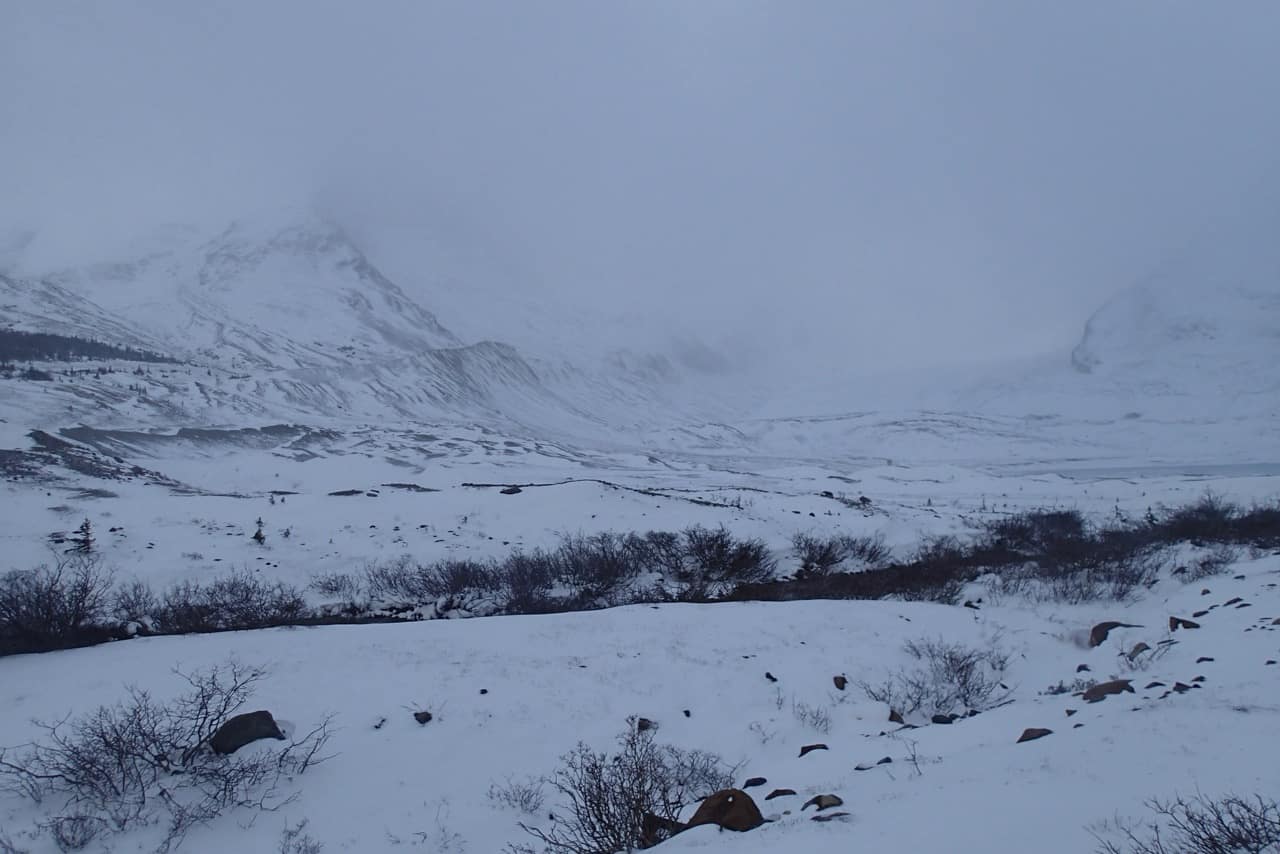 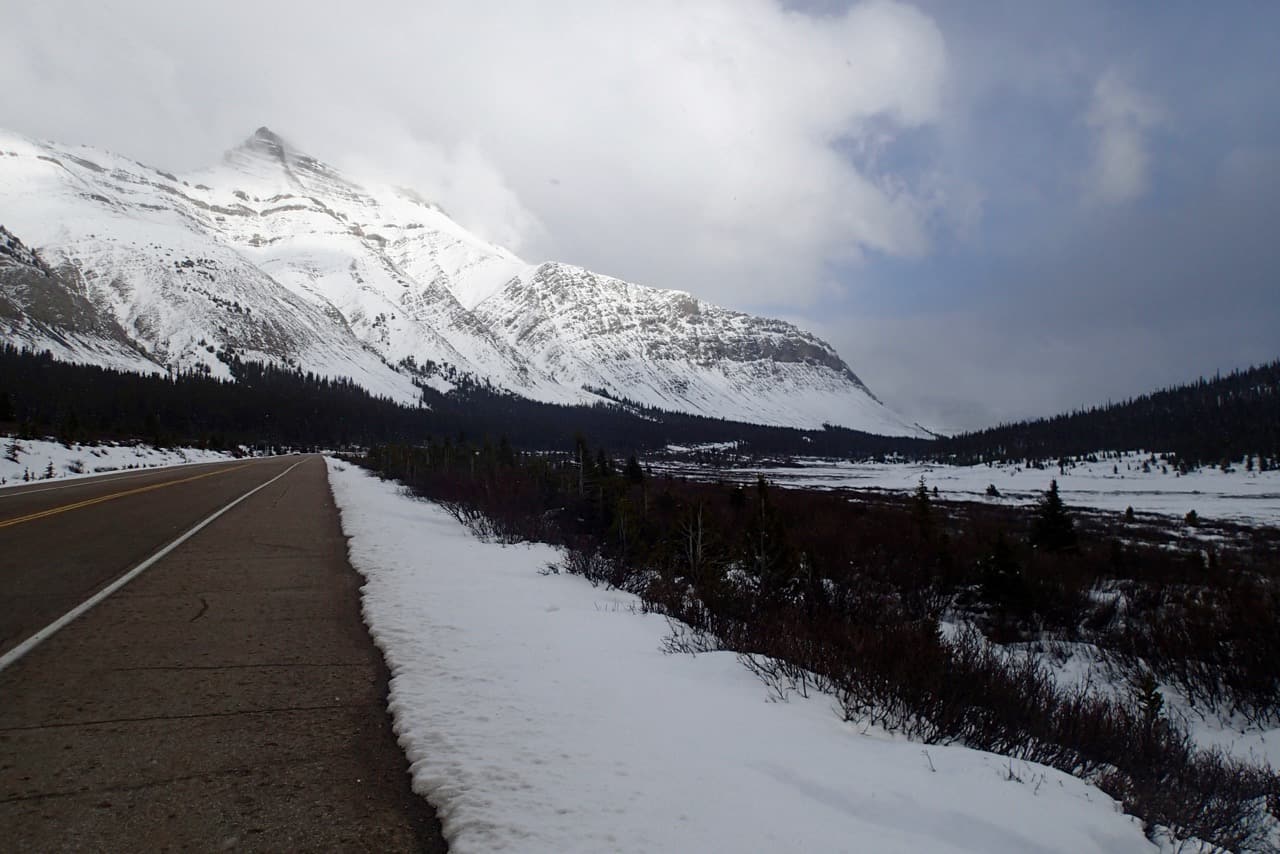 Later that afternoon we arrived at Hilda Creek hostel. A hostel without a staff but with a code to open te door. After we dragged our bikes into the snow about 10m towards the hostel, we decided to leave them behind at the road and lock them to the guardrail and only haul our bags through the 60cm deep snow up to the hostel. Those 100m were more tiring for me then the full day biking and crossing the pass. In the shed we found a sled which made it much easier to bring our bags back to the bikes the next morgen. 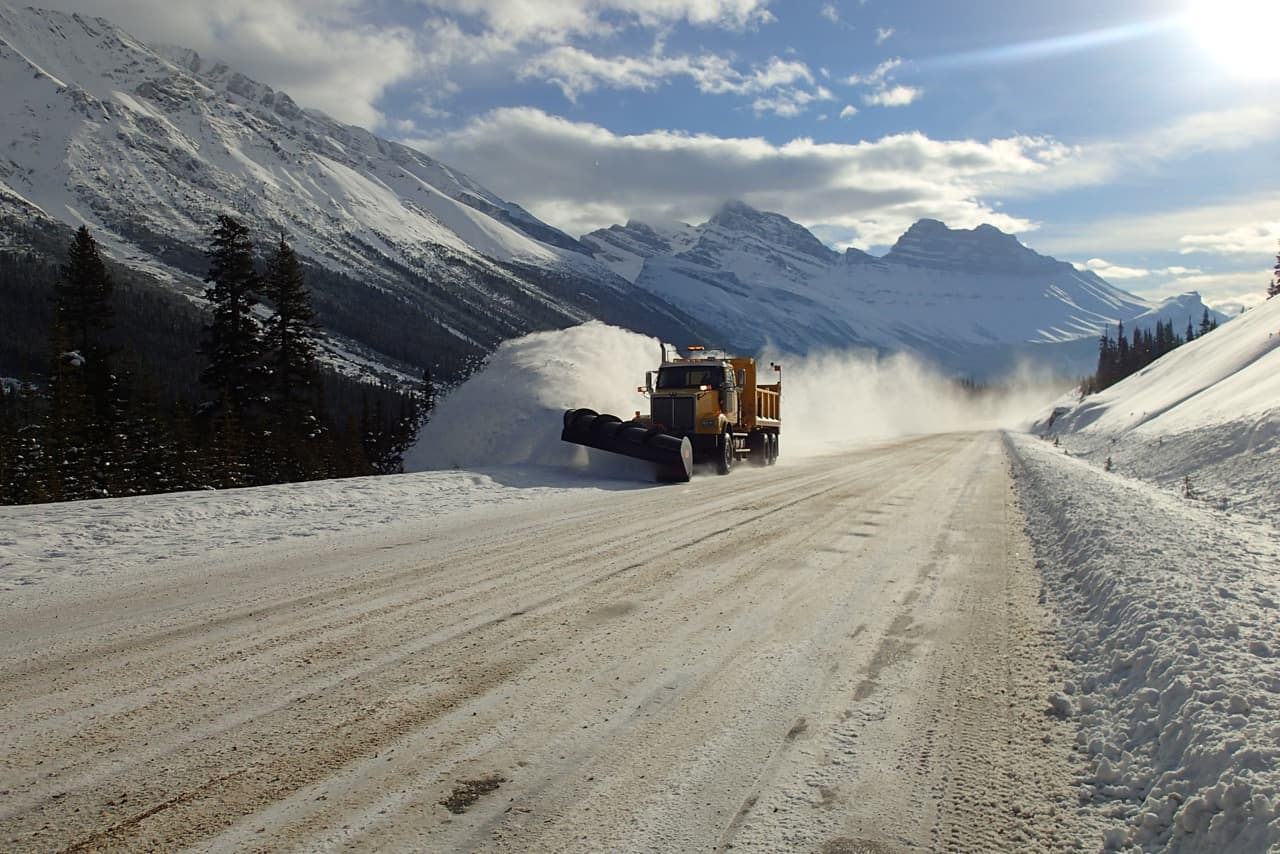 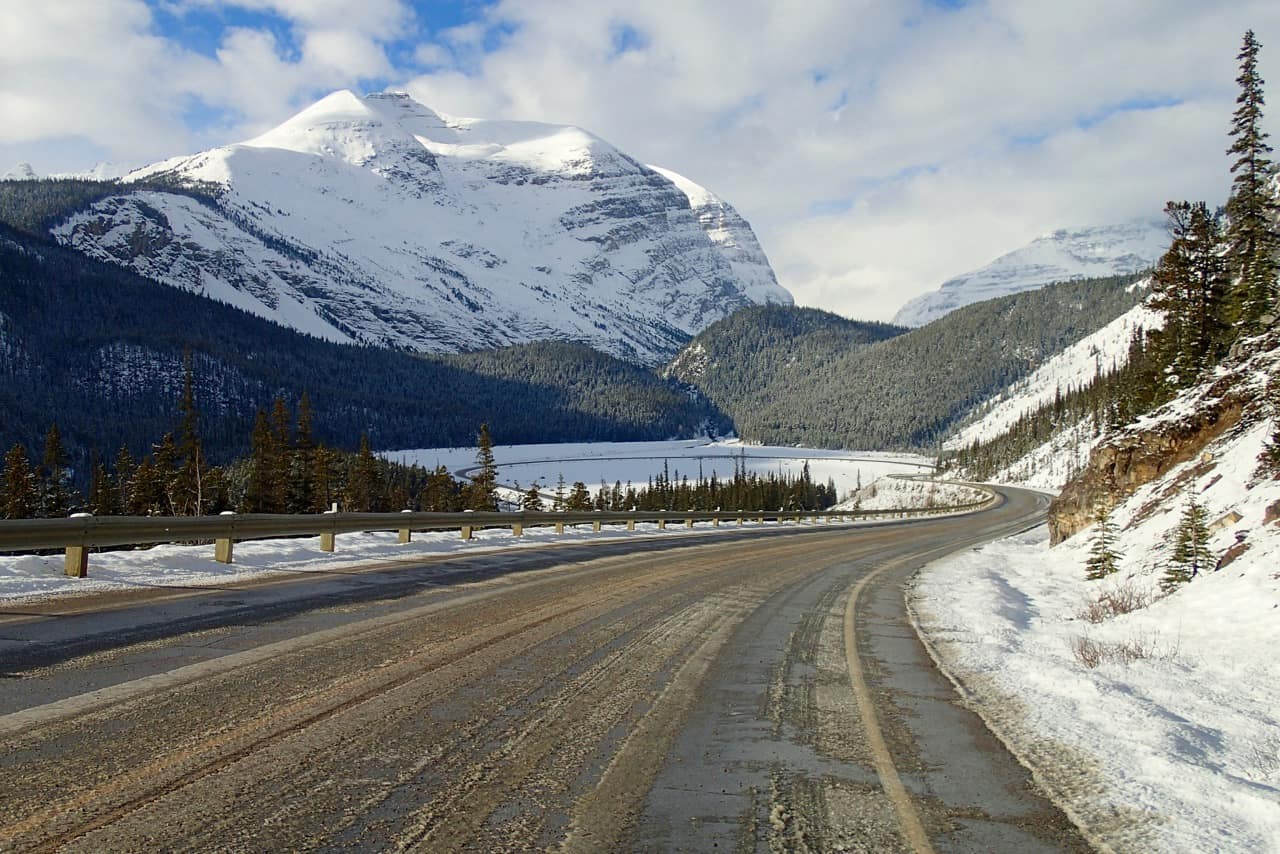 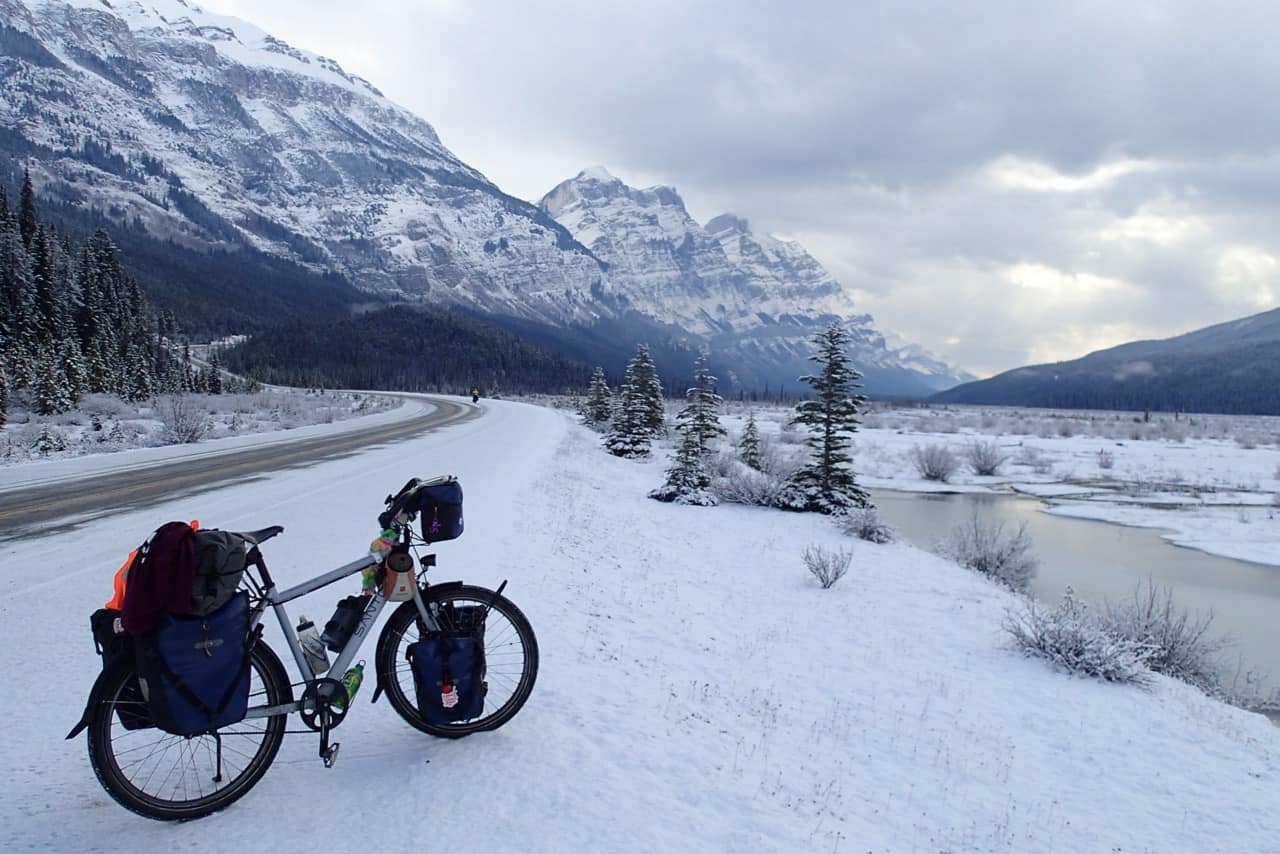 That day we only had an easy 60km ride to do, mainly downhill. At the end of the afternoon we arrived at another closed campground where we made a fire and started cooking dinner as suddenly a ‘Park Ranger‘ appeared. If we were planning on spending the night there, he wanted to know. I felt there was not much use in denying it so I responded: ‘yeah, well, I think so…’.
Obviously that was the wrong answer. Camping on a closed campground is forbidden, just like wilderness camping in a National Park. So his idea was we should get back on our bikes even though the next ‘legal’ accommodation was 60km up the road! It was already getting dark and that 60km included a 2067m pass. So, we couldn’t stay on the campsite because he was ‘looking out for our safety’, he said. If anything happened to us nobody would know we were there, because the campsite was closed. But he did want to send us back on the road in the freezing night up a pass?
He wasn’t gonna change his mind about our stay there and I wasn’t gonna let him send us back on the road in the dark. Not much later we were loading our bikes in his pick up truck to get a ride with him to Lake Louise, 60km up the road and at the end of the Icefields Parkway. A hour and a half later we sat perplexed in the restaurant having a burger and cola. From camping in the cold air, far away from ‘everything’ to a warm restaurant in a hostel surrounded by tourists and a shower and made beds waiting for us. A downer and a little party in one..

Because I didn’t want to leave the Icefields Parkway this way we hitchhiked back up with our bikes to Bow Pass the next day. The further we drove up the Parkway the bigger the snowflakes got. Up on Bow Pass out driver dropped us off in a blizzard.
As I dug into my pannier and took off my coat to dress a little warmer they both filled with big snowflakes immediately.
We could hardly see the road and I figured this was the perfect moment to wear my bright orange vest that I usually keep on the back end of my bike. Carefully we pedalled down the pass as the snowplow passed us in the opposite direction only putting gravel down for the traffic driving uphill. But as we descended the fog cleared and the snowfall got lighter and because we were riding without panniers that day we arrived back at the hostel halfway the afternoon. Time to put my feet up and relax on the couch with a hot chocolate and a book. 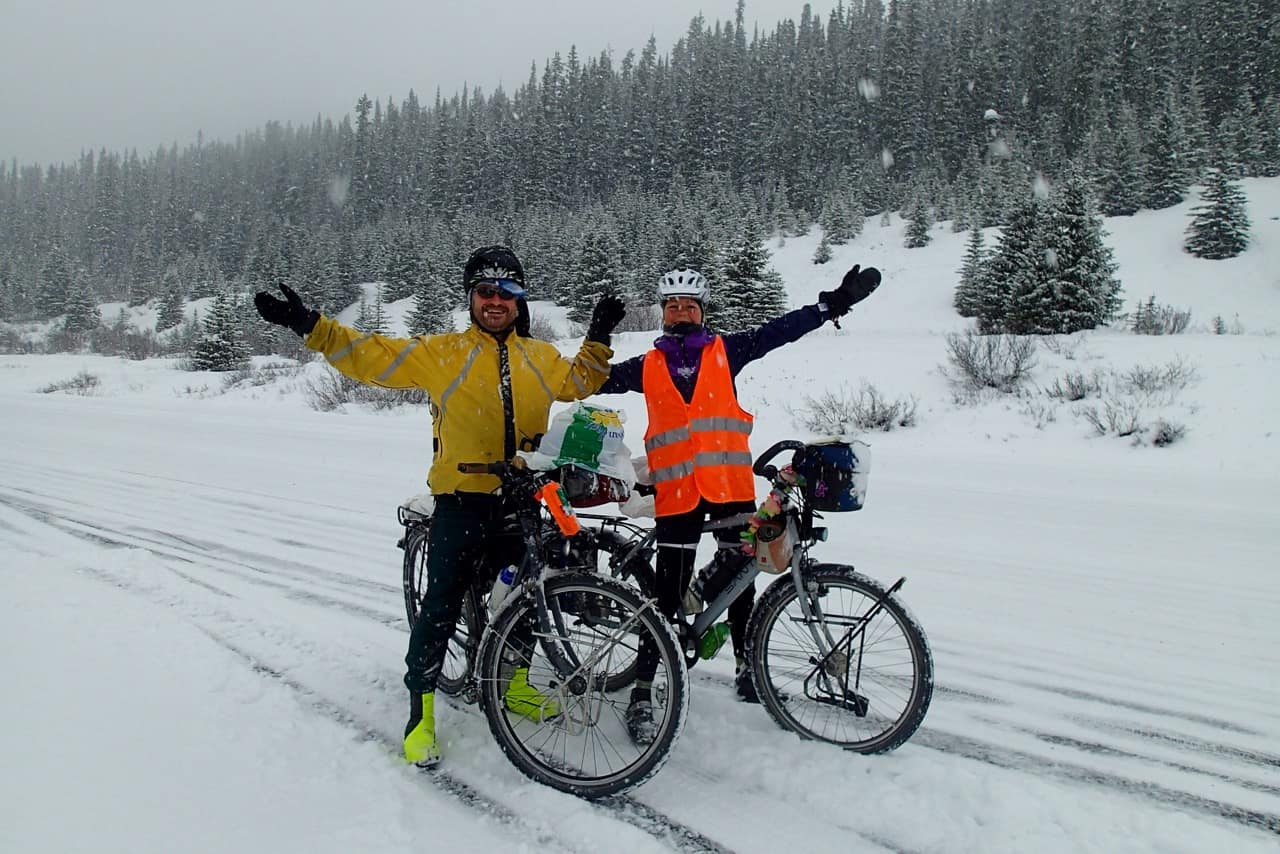 The next day we reached Banff, where we camped together with Shaun who just returned from Calgary (and who I met previously in Alaska an Jasper).
We spend the morning in a coffeeshop discussing routes, plans, bikes etc.
I enjoyed talking about bike travel as our ‘daily life’. I talk about bike travel almost every day, but it’s always my story that I’m sharing. With three cyclists at a table we could exchange stories, information and inspire each other.
I said goodbye to Bruce (who was going on a bus back to Jasper) and Shaun (who was heading to Vancouver) and biked a short ride to Canmore only to return to Banff two days later.

BANFF!
Some weeks ago I found out that from oct 29th to nov 6th the Banff Mountain Film and Book festival would be happening. I knew it from the ‘world tour’, a annually tour through 40 countries where they organise an evening full of outdoor and adventure movies. During the nine day long festival in Banff they select the movies for the world tour. 9 days, over 75 movies, 20.000 visitors, book presentations, discussions, workshops by National Geographic. All that and more happens during ‘nine epic days’ at the Banff centre for arts and creativity. When I heard about it I send them an email to see if they needed any more volunteers and here I am now, participating in this amazing festival!

To give you an idea, here’s last years trailer.

We’re halfway the festival now and still have the most busy and exciting days coming up!
The atmosphere is great. What I hope for during this festival is to get inspired for new adventures and maybe place my bar a bit higher again. Over and over I tell my story to people, and I enjoy doing that, but what I’d REALLY like now is to be impressed myself, to look up to other adventurers, to get inspired and let new plans grow. And I have to say the movies I’ve watched so far did a good job on that, but I also hope to meet people in the next days that will impress me with their stories, their courage and their ideas. 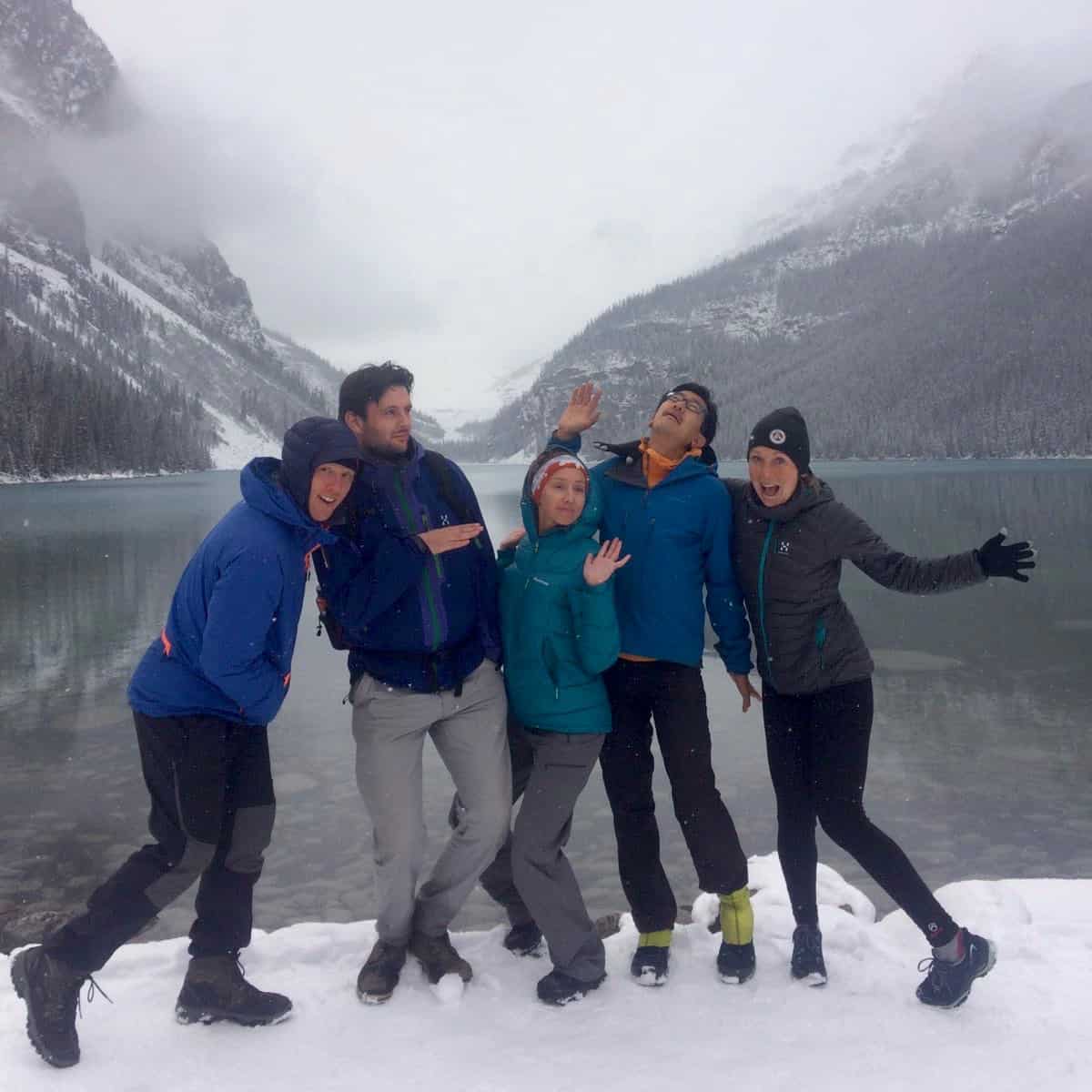 After the festival I’m heading south into the States. I’ll leave Vancouver for what it is. I want to go south! I feel that I’ve spend enough time in ‘the west’. I keep struggling with my longing for the purity and simplicity that I know from Asia. I’ve given North America a chance and I will remain doing so as I bike down the States, but I really look forward to exploring central and south America. It’s not the people, it’s not the nature, it’s how I felt before, that’s what I miss!
During my travels I was never ‘in search’ of something. But from this moment on I am, I am in search of the happiness I felt during my time in Asia en eastern Europe. And untill I find it, wherever, I fully enjoy the search and the road leading to it!